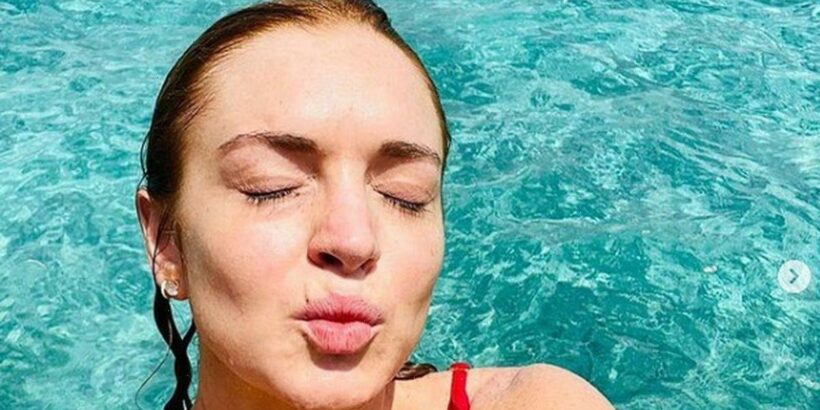 Lindsay Lohan is still in incredible shape 25 years after launching her Hollywood career.

The 34-year-old actress and former socialite signed for a model agency when she was just three.

But fast forward three decades and the movie and TV star has shown she is fighting fit with her latest social media snaps.

Lindsay glowed as she posed in an infinity pool whilst on vacation in the Maldives.

The Freaky Friday actress wowed fans in a plunging fire engine red swimsuit as she soaked up the sun at the luxury W Marriott resort.

And in a series of sultry snaps to her 8.8million Instagram fans, the fit-looking siren showed she still has the power to whip up a social media storm.

The images were liked a whopping 149k times and showed Lindsay in playful mood as she frolicked by the pool.

In one sexy shot the star Lindsay looks the picture of bliss as she relaxes, arms outstretched in the pool with a stunning shimmering sea ahead of her.

And in another image the popular actress is seen standing up in a sexy pose as she shows off her incredible curves.

Lindsay also playfully puckers-up for the camera with her eyes closed as she revels in her luxury relaxation.

A drone image also seems to caption the incredible water villa the star is staying in, with a kayaker paddling happily in the water.

Lindsay has been travelling the world the past few years having but is still working hard on her career.

She recently starred in TV series Sick Note and is due to star in a movie called Curse with fellow Hollywood actor Mickey Rourke later this year.

Lindsay has also revealed she is going to release a music single called Lullaby.

The Mean Girls star is preparing to launch the single on the NFT (non-fungible token) market.

She predicts the latest currency trend will make a major impact in the entertainment industry.

“It's only a matter of time till everyone in Hollywood and beyond gets involved,” stressed Lohan, in an interview with Forbes.

“Maybe we will see the tokenization of movies, and of how artists are paid for their films, music and art.

“I see a future where crypto, NFTs and blockchain will be the norm, rather than the exception.”