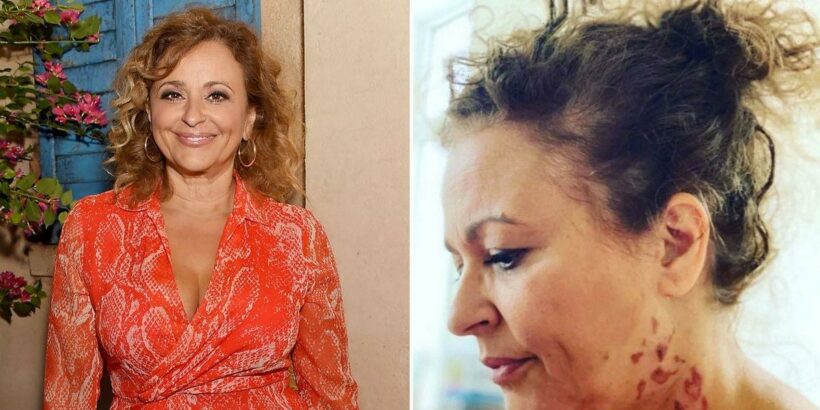 Loose Women star Nadia Sawalha has sparked concern among her fans after a horror accident left her with painful burns.

The ITV regular, 56, took to social media to open up about the traumatic incident in what she described as a 'week from hell'.

Nadia uploaded a image of her face and neck which is now covered in large red burns.

With her side to the camera, Nadia looked glum as a pal took an image the marks.

The outspoken star initially fold fans the story behind how she got the injury was 'too gruesome' to share.

Nadia told supporters: "This really has been the week from hell!

"I’m calling this my IDIOT INJURY! What a PLONKER I am!

"You will NOT believe how I got these burns. It’s quite a a story."

However, she later added via YouTube that the burns occurred during a major microwaving fail.

Nadia was heating up honey in a plastic bottle in the microwave before the plastic exploded and sprayed her. Nadia explained: "I opened the microwave and the plastic bottle was two seconds from exploding like shrapnel.

"I panic and go to get the honey. It leaps out the pot and sprays everywhere all over me and splashes up my neck.

"I was screaming and pulling my clothes off. I stuck my head in the sink. The pain was excruciating." Nadia later asked fans for help in how to recover from the traumatic injury.

The starlet penned: "I did this on Tuesday and the blistering (pics to gruesome to show you!) has been too bad to put anything on it.

"But I think I should start using something ASAP .

"Any suggestions would be greatly received ! You always have such great advice!"