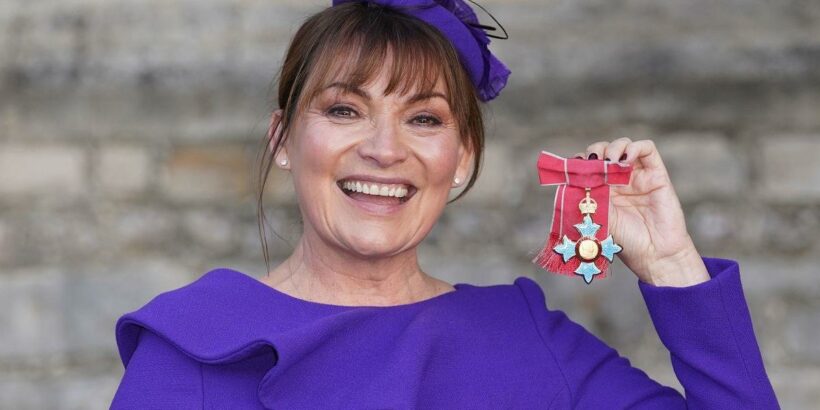 Presenter Lorraine Kelly looked absolutely thrilled as she was awarded a CBE for her Services to Broadcasting, Journalism and Charity on Wednesday afternoon.

The TV presenter, who has been working in the television industry since the early 80s, was seen smiling from ear to ear as she received the merit by Princess Anne at Windsor Castle.

Describing the moment as "fantastic", Lorraine, 62, confessed that meeting Princess Anne made the day "extra special".

The morning host exclaimed: "It’s been really good. It’s been a beautiful day. It didn’t rain, which was rather lovely.

"And I was so pleased it was the Princess Royal, Princess Anne. That made it even extra special.

She also added that she enjoyed meeting people at the Royal event and hearing their stories, especially those who work for the NHS.

Lorraine wore a beautiful purple dress to the occasion and accompanied the look with a purple fascinator.

The star also brought her cameraman husband Steve Smith with her for the ceremony and said she might have "a small sherry" to celebrate alongside her mother and daughter later on.

In 2020, Lorraine admitted she celebrated the news she was going to receive a CBE in the Queen's Birthday Honours by getting "extremely drunk".

Lorraine, who was previously made an OBE nine years prior, giggled as she claimed the honour is "a great excuse" to become "more drunk" than usual.

At the time, former Good Morning Britain host, Piers Morgan said: "You've been promoted from an OBE to a CBE. The next promotion is Dame Lorraine!"

Lorraine replied: "It's lovely. It's a great excuse. I got extremely drunk on Friday night. I just thought I probably would have done anyway but I got even more so!"

The star also previously spoke to Hello! about her accolade and said at the time: "This is such an unexpected honour.

"I'm very grateful and humbled – particularly as I'm in far more deserving company. All of those frontline workers are true heroes."

Lorraine was awarded an OBE by the Queen at Holyrood Palace in Edinburgh, during her Diamond Jubilee in 2012.