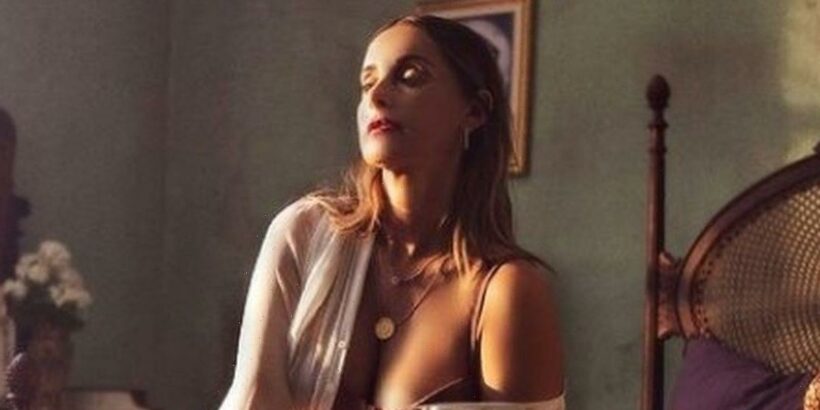 Louise Redknapp wanted to throw her full support behind women in the music industry – and she did just that with a celebratory post.

The 46-year-old Heavy Love hitmaker hailed some of the inspirational females that she'd personally looked up to over the years to mark National Album Day.

In the stunning post, Louise paid tribute to her hero Madonna as she recreated the hit album cover of True Blue.

Wearing an unzipped leather jacket, she exposed her bare shoulders as she tilted her head back.

Captioning the display, she wrote: "Today is National Album Day and this year its all about celebrating women in music!

"I've loved so many albums by female artists over the years across so many different genres from Diana Ross's The Boss (I still have the original cassette!), Janet Jackson’s Control (I could watch the music videos over and over), Kylie’s Rhythm Of Love (Kylie was the first concert I ever went to) and of course anything by Whitney!

"Right through to some of my more recent favourite albums such as Nao's 'Saturn', Kehlani's 'You Should Be Here' and currently Laura Mvula's 'Pink Noise'."

She added: "But there is one album that stands out for having played a big part in me wanting to be a pop star and that album would have to be @madonna’s True Blue

"There is not one song on 'True Blue' that couldn’t have been a single and the 5 Madonna did release are to this day pop classics. ‘Live To Tell’, ‘Papa Don’t Preach’, ‘True Blue’, 'Open Your Heart' and ‘La Isla Bonita’ – these 5 songs themselves show what a masterpiece of pop this album really was! There is not one person who couldn't sing along to these songs!"

The singer went on: "I even tried to recreate the True Blue cover for a photoshoot a couple of years back.

"What is your favourite album by a female artist or group?

"Join in and celebrate Woman in Music today in National Album Day talk about your favourite albums or even try and recreate the album cover like me."

On Monday (today), the 48-year-old ex-footballer and the Swedish model exchanged vows at a Chelsea Registry Office.

The loved-up pair are just weeks away from welcoming their first child together – a baby boy.

In the snaps, Jamie looked rather dashing wearing a navy blue suit, white shirt and black tie to complete his wedding attire.

While Frida stole the show, opting for a classic off-the-shoulder ankle length dress that glided over her blossoming bump.

Jamie's mum and dad Harry, 74, and Sandra Harris, 74, were in attendance along with his two children that he shares with ex-wife Louise – Charley, 17 and Beau, 12.