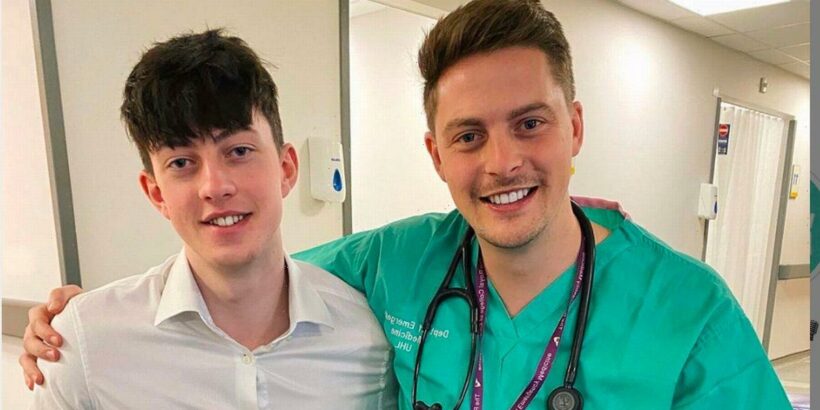 Love Island star Dr Alex George has paid a special tribute to his late younger brother Llŷr with a tattoo written in his sibling's handwriting.

The 31-year-old took to his Instagram account over the weekend to share a picture of the heartfelt design which is located on the inside of his left wrist directly under his wave tattoo.

Alex also shared an image of Llŷr's handwritten name on an old school workbook which that tattoo artist used to illustrate the inking.

Captioning the post, he shared with his 2million followers: "Llŷr [blue love heart emoji] 'God Of The Sea'.

"The most beautiful name, it means so much to have it done in his handwriting. We will never forget you my boy x."

Seeing the doctor's latest inking on their screens, fans quickly rushed to the comment section to share their thoughts.

One person said: "A beautiful tribute," followed by a blue love heart emoji.

Another commented: "Sending all my love to u and your family."

While a third shared: "A lovely idea to use his handwriting and carry him with you forever."

Llŷr was due to begin medical school before his passing.

In February, Love Island star and mental health campaigner Alex shared more insight into his brother's life to celebrate what would have been his 21st birthday.

He said: "It’s Llŷr’s 21st birthday today. Over the last year, I have spoken a lot about how hard losing him has been, I am sad though that I haven’t talked more about the person he was.

"Let me tell you a little about him. Llŷr was kind, sensitive, funny, loved his cars, and was a great brother and son. He was exceptionally clever and a great sportsman. We used to speak for hours about the latest cars and what our dream one would be.

"Llŷr loved his sport so much, at school, he used to score try after try in rugby. He was a perfectionist at heart. When he got into basketball he used to practice shooting at the net for hours each evening."

The TV personality also went on to share how good his brother was as a person.

He continued: "Above all Llŷr had a good heart, he had an ability to look into your eyes and could feel exactly what you were feeling. In many ways, he felt your pain and your struggles deeply and always wanted to help. He was an empath like no one I have ever known.

"I would do anything to be sat drinking a cold beer with you today for your 21st my boy. You will never be forgotten and you give me so much strength. Mum, Dad, Elliott and I send you the biggest happy birthday, we just wish we could be with you, even for a day. I love you, my boy."