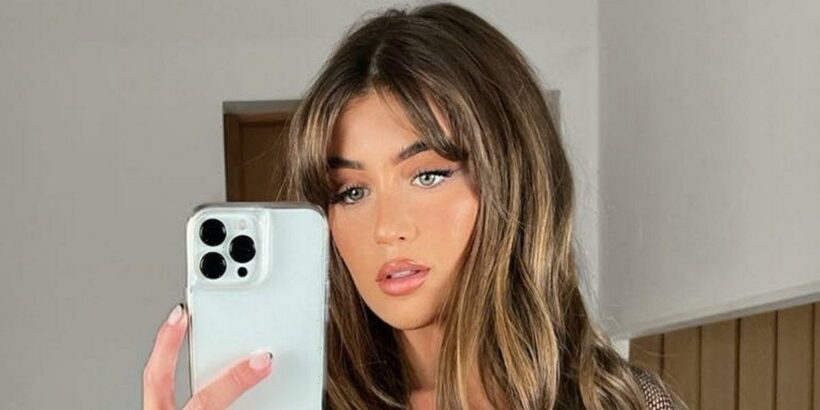 Love Island bombshell Georgia Steel left her fans with their jaws on the floor after she slipped into a sheer bodysuit on Instagram.

The North Yorkshire babe posted two near identical snaps for her 1.6million followers, and although she was almost completely covered up, her outfit left little to the imagination.

The former ITV beauty slipped into a matching bodysuit and suspenders set that was made out of a glittery sheer black mesh.

The long-sleeved top hugged Georgia's slender frame but she covered her chest with her hand as the bodysuit turned a little too see-through.

Her slim waist was accentuated by the belt of the matching suspenders that ran down her bare thighs.

Georgia wore her light brown locks in loose waves and let her fringe fall open at her forehead.

She wore a light makeup look with a slick of eyeliner and a soft pink hue on her lips.

The reality star, who has also appeared on Ex on the Beach USA, wrote in the caption: "I want it ima get it," and tagged the brand Fashion Nova, making it clear the post was an ad.

Another branded Georgia "stunning", throwing in some heart emojis in the mix.

Someone else said: "Okay my next festival outfit."

And another wrote: "Stunning beautiful lady and so cute."

Georgia found fame after joining the Love Island villa as a bombshell in 2018, alongside Rosie Williams.

While Rosie had a tough time, Georgia seemed to have it easier after she eventually coupled up with Sam Bird.

They were dumped from the villa on Day 47, before Dani Dyer and Jack Fincham were crowned the winners just over a week later.

Since then, Georgia attempted to find romance on Celebs Go Dating and then on Ex on the Beach: Peak of Love.

She met Ibiza Weekender star Callum Izzard on the show and he proposed to her during filming.

It wasn't meant to be though and they later split up.

Hopefully the next batch of Love Island beauties will be more successful when the show starts tonight (June 6).