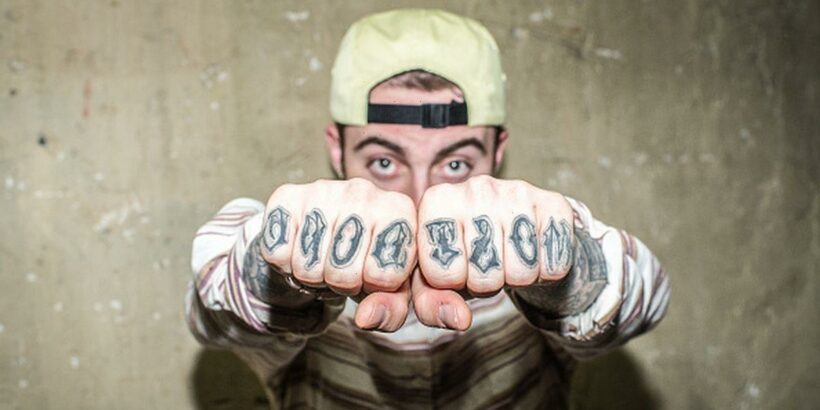 Hip hop star Mac Miller, who was also Ariana Grande’s ex-boyfriend, died of a drug overdose at his Los Angeles home and studio in September 2018.

A lethal cocktail of fentanyl, cocaine and alcohol was found in his body, which was discovered face down in his home by a personal assistant.

There was a rolled $20 note covered with a white powdery substance in the pocket of his shorts and an empty bottle of liquor next to the bed.

Best known for singles like 'Donald Trump' and the award-winning album 'Swimming' (which was posthumously nominated for Best Rap Album at the Grammys), Miller had struggled with substance abuse since he was a teenager and it was often referenced in his powerful lyrics.

Fans of the star from Pittsburgh, Pennsylvania, may have been aware of Miller’s love for tattoos after seeing selfies on his social media channels but they might have been surprised at just how many times the hip hop star had faced the tattooist’s needle.

The autopsy report when he died went as far as listing all the tattoos on Miller’s body as well as marking them all on diagrams.

In fact, there were so many tattoos that even the coroner could only describe a few of them as there simply too many to list.

Apart from the large flower on his neck, Miller didn’t go as far as inking his face but the rest of his body was plastered with tattoos of varying sizes and quality.

One of his best known tattoos was his birth year of 1992, which was tattooed as the Roman numeral MCMXCII on his right hand.

His appreciation of the Pittsburgh Pirates was celebrated with a large “P” logo tattooed on his right hand.

The rapper even had provocative tattoos on his knuckles reading “MOST DOPE”, which he said always got him into trouble at airports.

Other tattoos included a sunset on the back of his left hand, a Star of David on the middle finger of his right hand and a kangaroo with boxing gloves on his right leg.

A classic ‘Sacred Heart’ design was inked on his left leg, whilst a blue Brontosaurus and yellow smiley face was tattooed on his right calf.

An alien riding The Beatles’ yellow submarine on his right leg was one of his favourites.

Other tattoos on Miller’s heavily inked body included a ribbon tattoo with the words ‘in this crazy world’ on his left forearm, which also contained a Hebrew letter.

His love of Beatle John Lennon could also be spotted with the ‘Imagine’ tattoo on his inner right arm.

Miller’s chest was covered with designs, from ‘No Woman No Cry’ and an eagle to ‘we are confused’ written on his abdomen.

Elsewhere, there were tatts of clocks, Marilyn Monroe in her iconic red dress and a balloon with a figure in a canoe.

But, perhaps, most poignant of all was the tattoo inscribed on his left forearm with the words ‘Only so much time left in this crazy world’.

It seems a touching reminder of Miller’s life, which was tragically cut short at the age of 26.

After Miller’s death, Ariana Grande paid tribute to her ex by having a tattoo on her food with the word ‘Myron’ – the name of the dog the couple had adopted when they were dating.