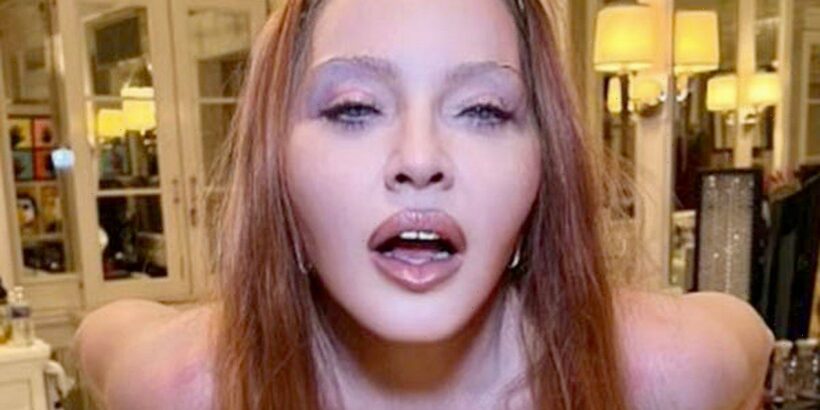 Madonna risked being faced with an Instagram ban after she posed in the nude, taking a stunning selfie.

In a now-deleted post, the Hung Up singer took to the platform and shared a sizzling selfie with her followers via Instagram Stories.

In the upload, the Queen of Pop – who donned bleach-blonde eyebrows – was seen pouting as she took a snap while wearing what appears to be nothing but only her birthday suit.

READ MORE: Madonna sucks own toe in daring snap which was too racy for '90s album cover

The chart-topping singer, who recently wore fishnets and hotpants for another daring snap, was seen posing with the backwards peace sign over her mouth in one snap.

In another, Madonna's looked straight into the lens as she showed off her newly bleached ginger hair.

Alongside the selfie, she added the words “bad girl”.

Madonna’s recent social media update comes a few days after the star shared a series of completely topless pictures on her Instagram profile.

The 64-year-old bared all as she stripped off for the seriously racy snaps and followers couldn’t believe their eyes as she posed with everything on show.

The Vogue star, again, took to her Instagram Story and showed fans her assets as she held her head with her hands.

She placed her perfectly manicured hands on the top of her head as she let her chest free, covering her modesty with lollipops and money bag emojis.

The only items of clothing the singer wore were a pair of black fishnet tights and a corset that cinched her in at the waist and gave her an exaggerated hourglass figure.

The pop star wrote: “Went from candy to money.”

Another picture showed her leaning forward with her assets on full display as she pulled a seductive expression, her mouth wide open and her hands behind her back.

The saucy snaps are believed to be in celebration of the 30th anniversary of her fifth studio album Erotica, which was released in October 1992.

At the same time, Madonna released her book Sex which includes X-rated pictures of the pop icon.