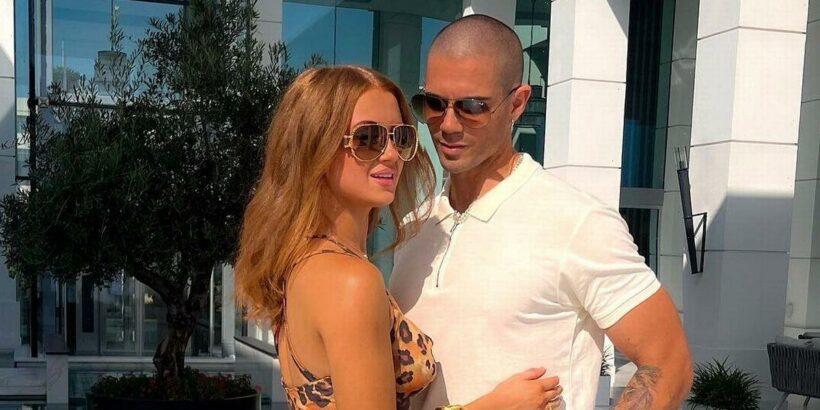 Max George and girlfriend Maisie Smith put on a united front as they posed in matching trackies while enjoying an intimate cuddle.

Actress Maisie can be seen leaning in on her man with her legs laid on a garden sofa as Max wraps his arm lovingly around her.

The pair both posed in black and white Ed Hardy tracksuits as they shot a smouldering stare at the camera.

Maisie looked dolled up with a full face of heavy make up as Max sported some silver jewellery accessories.

The Wanted star Max recently hit back after his relationship with his girlfriend and former Strictly Come Dancing co-star was called “controversial” due to their difference in age.

The chart-topping singer confirmed earlier this year that he and Maisie were an item after they grew close on the most recent Strictly tour.

Earlier this week, the pair gave their first joint interview, in which they discussed how their relationship first blossomed and the 13-year age gap between them.

However, Max voiced his upset when he saw a comment referring to his romance with Maisie as “controversial”. “I’ve just read that apparently mine and Maisie’s age gap is ‘controversial’,” he tweeted.

It’s not the first statement the pair have made about the strength of their relationship.

Max previously told Hello! magazine that the fact his girlfriend is younger than him “never enters my mind”, prompting the EastEnders star to add: “People ask me: ‘Do you notice [the age gap?’. I never have.

Max's response comes shortly after he debuted a new tattoo of his girlfriend Maisie Smith's face on his arm.

The Wanted singer, 34, showed off the new inking on social media, which sees Maisie's face interspersed with that of a lion.

The tattoo, which Max had done at INK'd in Fulham, is a replica of a photo of Maisie, 21, while she was on Strictly Come Dancing.