“I don’t think I know these songs that well, and I wrote them!” said Maren Morris, complementing the audience early in her sold-out performance at Nashville’s Ryman Auditorium on Wednesday night.

She wasn’t exaggerating by much — the singer-songwriter’s new album Girl came out Friday, March 8th, and the Ryman show was only the second stop of her headlining 2019 Girl: The World Tour. Even so, Morris pulled out all the stops, blending pop-star swagger with the intimacy of a scaled-down songwriter’s night and even calling up guests Brandi Carlile, Miranda Lambert, Natalie Hemby and Cassadee Pope to sing with her. For those who missed it, good news: She announced she’ll be back in Nashville on October 18th, this time playing the outdoor Ascend Amphitheater.

Morris joked about people “cramming for this test” by studying the newly released album ahead of her Ryman show and, as she performed every track from Girl over the course of the evening, it appeared to be true to some extent. Fans were already quite familiar with the set-opening “Girl,” during which Morris, dressed in glittering knee-high boots and a sparkling blue-gray romper, descended from a riser with a white Les Paul in hand. Many folks in the crowd still hadn’t mastered the timing on the bubbly tune “The Feels” or learned every lyric to “Gold Love” the way they have with most of the tracks from Hero, but they gamely danced and swayed to the new music regardless.

Occasionally, this lack of familiarity meant an overabundance of Morris’ slow-burning ballads. After the rip-roaring fun of “All My Favorite People” (with opener Cassadee Pope filling in for Brothers Osborne), the pace began to lag a little with a run of several slower numbers. Midtempo tracks “Flavor” and “Great Ones” tried to counter things slightly, but it took until “Rich” for the energy level in the room to fully recover. 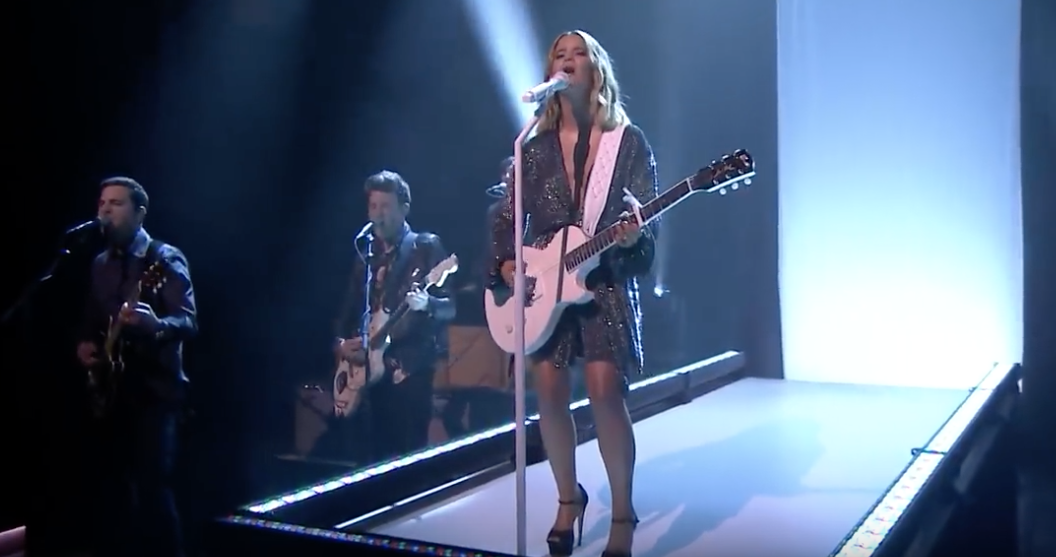 Even so, the star power of Morris’ guests was its own welcome form of excitement. Brandi Carlile, with whom Morris will sing in the Highwomen trio with Amanda Shires, came out to perform the soaring duet, “Common.” Whether longtime fans or newly hip to Carlile after the Grammy Awards, the crowd went absolutely nuts to hear these two voices harmonizing so beautifully in person.

For as much as has been said about Girl being a pivot toward pop stardom for Morris, her Ryman show emphasized she’s still very much a Nashville songwriter at heart. She still told stories to introduce her songs, like an anecdote about a radio DJ who told her people didn’t want to hear women being sad on the radio (“And that guy doesn’t have his job anymore — the universe is funny that way”) to set up a cello-assisted “I Could Use a Love Song.” Likewise, when she brought out surprise guests Miranda Lambert and Natalie Hemby, she opted to have them sing an album cut from Lambert’s The Weight of These Wings (“Virginia Bluebell”) simply because she liked it and followed that with her own “I Wish I Was,” her acoustic guitar providing the only instrumental accompaniment.

And yet, it’s hard to deny her pop-star ambition — which, it’s worth noting, was just as present on Hero as it is on Girl, even if the reference points have changed slightly. Her Ryman show demonstrated she’s comfortable slipping in and out of these different aspects of her musical personality, playing the song-obsessed troubadour when she delivered “A Song for Everything” or embodying the sexually forthright pop performer when she straddled a chair for the steamy R&B jam “RSVP.” And, of course, there was her smash dance collaboration with Zedd and Grey, “The Middle,” which her band gave a slight rock & roll edge as it closed her encore.

The songwriter in Morris emerged once again at the conclusion of the main set, when her entire group of guests — Carlile, Lambert, Hemby and Pope — returned to help out on her debut hit “My Church.” It appeared to be an unplanned, spontaneous decision by the guests to come back out and find a harmony somewhere in that mile-wide hook. But then again, that’s what you do when you hear a great song: lift your voice up and sing along with your friends.