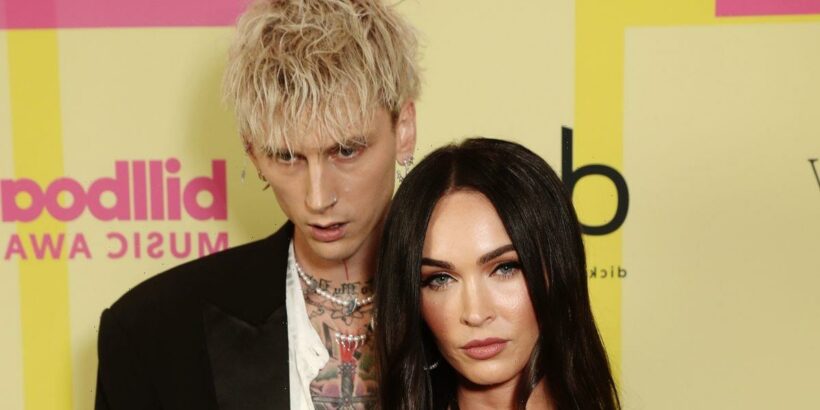 Megan Fox left absolutely nothing to the imagination last weekend as she flaunted a serious amount of flesh in a virtually non-existent frock.

Appearing on the red carpet of the Billboard Music Awards, the Transformers star wowed in a barely-there garment as she groped her boyfriend Machine Gun Kelly's crotch.

The actress, 35, looked glamorous as ever in the floor-length gown, which was seemingly held together by threads of black peephole material.

All eyes were drawn to the brunette's toned torso, as the dress was swathed in transparent material that fell from her hips towards her feet.

Her raven locks had been groomed into brushed-out waves, which tumbled to her waist.

The Transformer actress teamed the gothic-inspired look with a towering pair of platform open-toe heels which matched the black colour scheme.

Taking to the red carpet, Megan and the Bloody Valentine singer left spectators collecting their jaws from the floor.

The Tennessee native and the "Rap Devil" first met in March 2020 while filming Midnight in the Switchgrass.

Putting on a show on the red carpet, they began to make out with one another before the cameras.

Megan and Machine Gun Kelly – whose real name is Colson Baker – found themselves at the centre of speculation after they were reported to be "friends" but were "spending more time together".

At the time of these sightings, Megan's 10-year marriage to Brian Austin Green had only just broken down.

Brian spoke out, slamming the accusations and defended his former flame.

Speaking on his podcast, Brian explained he'd separated from the mother of his three sons Noah, Bodhi and Journey at the end of 2019.

Brian didn't "want people to think that her or he were villains" or that anyone was a "victim" in any way, as that wasn't the case.

In the same discussion, he also revealed that Megan and Machine Gun Kelly were just "friends".

After it came to light that Megan and Machine Gun Kelly's romance had evolved, a source backed up Brian's claims, telling US Weekly: "They started off as friends and their relationship grew from there.