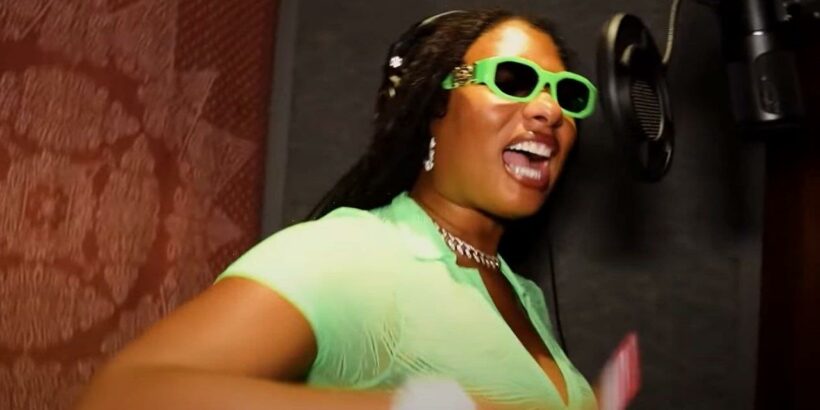 When hitting back at her critics in the two-minute freestyle, the 26-year-old Grammy-winning artist rhymes, ‘If I worry ’bout the hate, I’d be a damn fool.’

AceShowbiz –Megan Thee Stallion continues to shade her haters through music. More than a week after releasing “Outta Town Freestyle”, the “Savage” femcee dropped “Tuned In Freestyle” in which she claps back at her “broke” critics.

In the two-minute video released on Sunday, August 22, the 26-year-old can be seen rhyming boastful lyrics as she enjoys a glass of wine. “Talk about something y’all like, stop talking ’bout me,” she raps. “Since y’all hate a b***h so much/ The way broke b***hes coming for me know it gotta be free.”

“All you h**s can suck my p***y, disrespectfully/ How a ho gon’ punk me out my spot that can’t get next to me?” the Grammy winner continues. “Your vocab don’t go past ‘Period,’ ho, don’t question me/ Any n***a publicly hatin’ is makin’ less than me, I bet you.”

Megan has treated fans to new music after making her return in June following a brief hiatus. At that time, the “Good News” artist released a single called “Thot S**t” in which she apparently shades politician James P. Bradley for mocking her collaboration with Cardi B, “WAP”.

Earlier this month, Megan gave an update on her upcoming sophomore album. “I feel like this project is definitely something very well thought out,” she said when speaking to Essence. “This project is me talking my s**t, getting back comfortable with myself, getting back to the Megan that was on the come-up.”