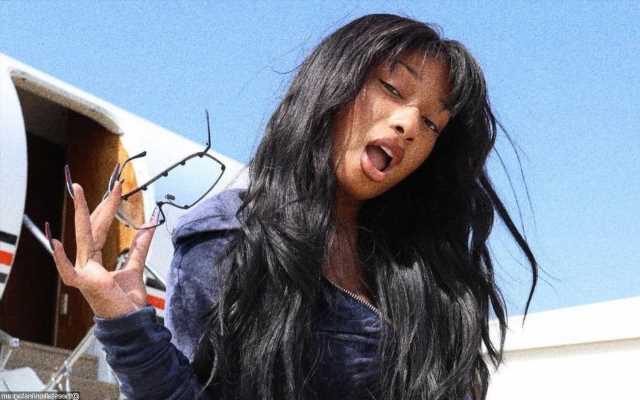 Feeling grateful over the support, the 26-year-old ‘WAP’ singer writes, ‘Thank you everyone involved and most of all thank you hotties for RUNNING IT TF UP.’

AceShowbiz -It’s a happy day for Megan Thee Stallion. The Houston rapper took to her Instagram account on Thursday, July 15 to celebrate with fans after her debut album “Good News” was officially certified platinum by the Recording Industry Association of America (RIAA) as it reached one million units.

“HOTTIESSSS GOOD NEWS IS OFFICIALLY PLATINUM,” Megan wrote on her page. “This is my first platinum album and I’m so proud! I made majority of this album in my living room during quarantine and to see it really do its thing makes me so happy!”

Feeling grateful over the support, the “WAP” singer added, “Thank you everyone involved and most of all thank you hotties for RUNNING IT TF UP.” She concluded, “can’t wait for y’all to see what’s next.”

“This is amazing Meg,” standup comedian Jasmin Brown wrote in the comment section. Also feeling happy for Megan was Cyn Santana as the “Love & Hip Hop: New York” star commented, “Congrats Meg!!!!” Meanwhile, an excited fan said, “We ready for the new new !” Another fan added, “congratulations!!! so proud of you”

In other news, Megan recently invited her fans to come to her graduation. The three-time Grammy winner, who is currently studying health care administration at Texas Southern University, shared her plan to have Hotties on the big day in tweet on Monday. “I really want some of my hotties to come to my graduation,” so she said.

In a separate tweet, Megan reflected on her college journey. “My college experience has been a roller coaster! I started at PV went to come community colleges in between and I’m ending at TSU,” the “Savage” hitmaker opened up. “Don’t get discouraged! You can chase your dreams and your education at the same time.”

As a college student herself, Megan seemingly knows the struggle as she offered a full-tuition, four-year scholarship to a student at the Roc Nation School of Music, Sports and Entertainment at Long Island University. “I still have academic goals that I want to achieve, so if I can use my resources to open doors and create opportunities for at least one student, then it’s a victory,” she said in a press statement at the time. “It’s important that we encourage our students to pursue their passions and put them in positions to become the next game changer in whichever fields they choose.”