Paul Dwyer describes himself as part of the Michael Jackson family.

The Melbourne superfan, who met Jackson in 1996 and flew to the US to mourn the singer’s death in 2009, is part of a passionate fan base seeking to discredit a new documentary creating shockwaves around the world.

The documentary features shocking testimony from Robson and James Safechuck and their families who accuse Jackson of repeated grooming and sexual abuse. Jackson's family denies the two men's claims and is suing HBO for $US100 million.

Mr Dwyer cites FBI investigations and the lengthy court case that cleared Jackson’s name as evidence of his innocence, but leaves the door ajar.

“If there was evidence to say he was guilty – I’m not closed off to that option – I’d be pretty upset. I couldn’t be a fan of someone who was found guilty of such a thing. But from the research I’ve done, I believe that he’s innocent.”

Mr Dwyer said Jackson’s army of supporters are roughly divided into two camps: “Half just want to boycott the documentary and any networks who support it. The other half want to research and fact check it.” 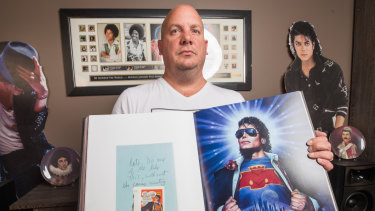 Many Michael Jackson fans are out to defend his legacy. Paul Dwyer is the admin of the Michael Jackson Australia Facebook page and wrote a book about Jackson’s humanitarian endeavours. Credit:Jason South

Leonie Donohue, another Jackson fan, falls into the first category. The 39-year-old has five Jackson tattoos and staunchly defends her idol’s legacy. She believes the accusers have ulterior motives.

“It’s a massive money grab. It’s always been about money for these people,” she said.

Ms Watson said she will remain a fan of Jackson’s music, but chooses to believe the victims’ testimony.

“You can appreciate his music but abhor what he’s done in his personal life,” she said. “The real life persona and the body of work is separate in my mind.

“I understand victims of assault don’t necessarily come forward at the time because they feel they won’t be believed, especially if there’s a power differential between the perpetrator and the victim."

While Jackson is unable to defend this latest hit to his legacy and reputation, there’s no shortage of people going into battle for him.

To those sitting on the fence after watching the documentary, Mr Dwyer has a simple message: “I would just say fact-check, do your homework and research, then have an educated opinion.”