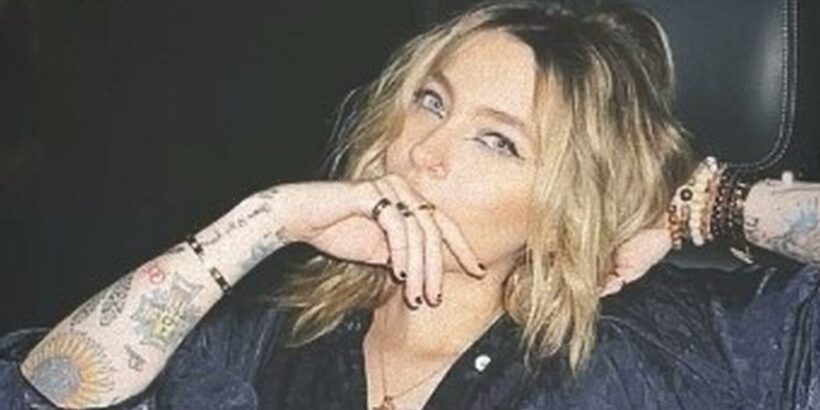 The daughter of the late Michael Jackson, Paris Jackson cranked up the heat for her Instagram followers.

Paris, 23, who regularly documents her life on social media, sent fans into a frenzy as she donned an eye-popping frock on a wild night out.

The singer and songwriter sent temperatures soaring as she exposed her naked breast in cut-out oversized shirt dress.

Enjoying what appeared to be a taxi ride in the evening, the King Of Pop's only daughter sizzled in the car as she posed for the camera – unveiling the deliberate hole in her dress.

Not wanting to risk a warning from Instagram officials when it comes to nudity, Paris used a selection of fun emojis to conceal her nipple from view. Although the hitmaker's ensemble was a tad on the risky side – especially because Paris had gone braless – it's still hard to ignore the the lavish silk fabric of the button-down smock-dress.

Paris's on-trend midnight coloured outfit shimmered away against the flash of the camera.

In keeping with her Bohemian inspired look, the chart-topper popped on a number of beaded bracelets, a gold nose stud and a pendant necklace to complete her evening attire. Her blonde locks were styled into brushed out waves that fell just above her shoulders.

By way of makeup, she opted for dramatic winged liner, bronzed contoured cheeks, dark eyeshadow and a flutter of mascara.

Many of Paris' famous inking were on show as the bat-winged item boasted three-quarter sleeves.

Paris is not one to shy away from celebrating sisterhood and the female body and she proved that last month with a number of breathtaking images that were shared on Instagram. Apart from wearing a headband, there wasn't a seam of clothing in sight by Paris or any of her femininity squad – who were happy and comfortable in their own naked skin.

As part of the full moon gathering to mark the Aries new moon, the women joined one another with mini cauldrons, candles, incense, spell books and a large orange blanket for all to perch on.