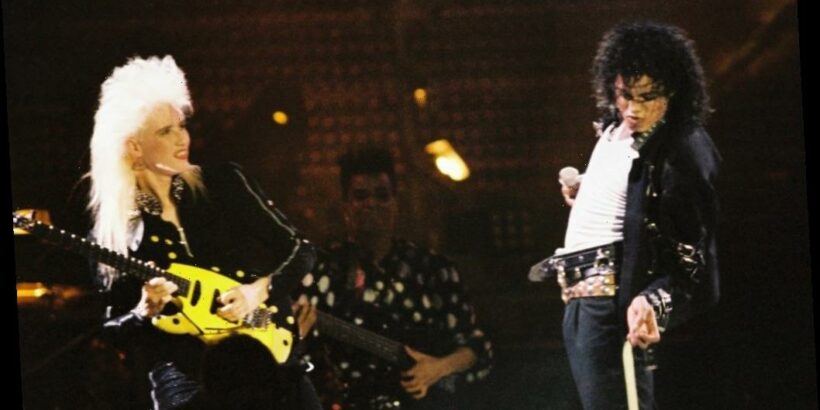 So what did Jackson’s touring guitarist do when it came time to play ‘Beat It?’

Michael Jackson wrote and recorded ‘Beat It’ in 1982 for his album Thriller. He wanted to have a song that was more of a rock song, though rock was never really Jackson’s genre. Nonetheless, he penned ‘Beat It,’ trying to come up with something that would have a wide appeal. After recording an early version, producer Quincy Jones decided an Eddie Van Halen guitar solo would add to the song.

Van Halen didn’t believe that he was being asked to collaborate with the King of Pop, but Jones meant it. And when Van Halen showed up to record, Jones decided to give him a large amount of freedom with the solo. With Jackson’s writing and performance, Van Halen’s killer guitar chops, and Jones’ expert production, the song became a huge hit.

Jennifer Batten wasn’t touring with Michael Jackson when she heard ‘Beat It’ for the first time — in fact, she was still playing with a local cover band. However, the solo entranced her, and she quickly bought a cassette, so that she could learn the solo by ear. The solo is incredibly technically difficult, and Batten had to slow down the cassette to be able to play it. But learning Van Halen’s technique was important to her. According to Batten in a conversation with Guitar World,

Somebody asked me the other day if I was told to play it that way or if it was my choice. It was definitely my choice because I thought it was one of the most perfect solos in history. I knew I couldn’t do better than Eddie. I was proud to play it as it was. And it was challenging. It’s still challenging.

Her tenacity and discipline in learning the difficult solo paid off, though, when she became Jackson’s touring guitarist. It paid off both in career success and financial, as according to Batten, “Later on that solo bought me a house!”

Ironically, Eddie Van Halen actually forgot how to play his iconic solo. He hadn’t asked to have his name on the record, and never received royalties — he just played the solo as a favor to Quincy Jones and Michael Jackson. It just wasn’t something he was playing regularly after the studio recording. However, it seems to have been important to him, as in the late 1980s, he contacted Jennifer Batten and asked her to show him the solo. She did, and he was able to remember the solo.

It goes to show — there’s a lot you can learn and achieve from copying the masters. Batten’s diligent practice of Van Halen’s solo let her become the touring guitarist to one of the biggest artists on the planet, earned her a solid living, and developed her skills to an incredibly high level.