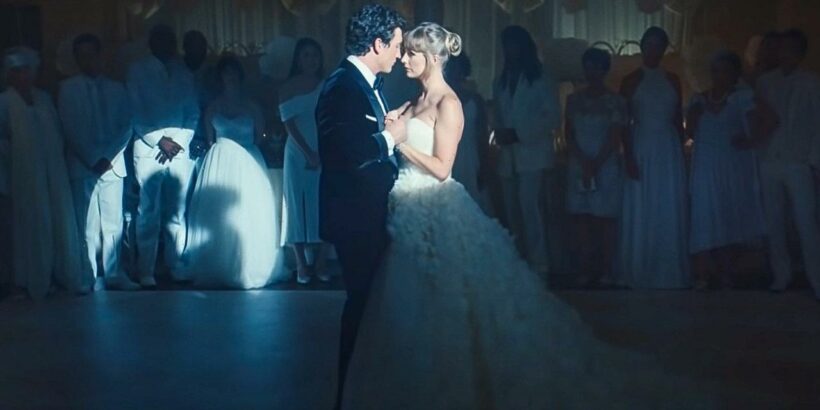 Serving as Blake Lively’s directorial debut, the six-minute comedic promo concludes with a thank you note to ‘every single person who worked to make this video what it is.’

AceShowbiz –Miles Teller stars in Taylor Swift‘s latest video, directed by the singer’s pal Blake Lively. The promo for “I Bet You Think About Me” dropped on Monday, November 15 and features Teller as a nervous groom struggling with memories of an ex, played by Swift, who has written a break-up song about him.

In the video, which serves as Lively’s directorial debut, Swift torments Teller’s character on his wedding day as he imagines her among his guests. “The Whiplash” star’s real-life wife, Kaleigh, plays the bride.

The quirky promo begins with Teller running over his vows in a mirror as four ushers relieve themselves in urinals next to him.

The video also features Swift’s band, including The National star Aaron Dessner, who teamed up to collaborate with the pop star for her “Folklore” and “Evermore” albums. The song also features Chris Stapleton, but the country star doesn’t appear in the video.

Lively and Swift’s brother, Austin, are also credited as the video’s producers. A note at the end of the six-minute film reads, “A huge thank you to every single person who worked to make this video what it is.”

“Every member of the crew in pre, post and physical production. Every actor. Our COVID safety team. The musicians, writers, producers and technicians who are behind this song. And to all of our families who supported us as we dream impossible things. We thank you.”