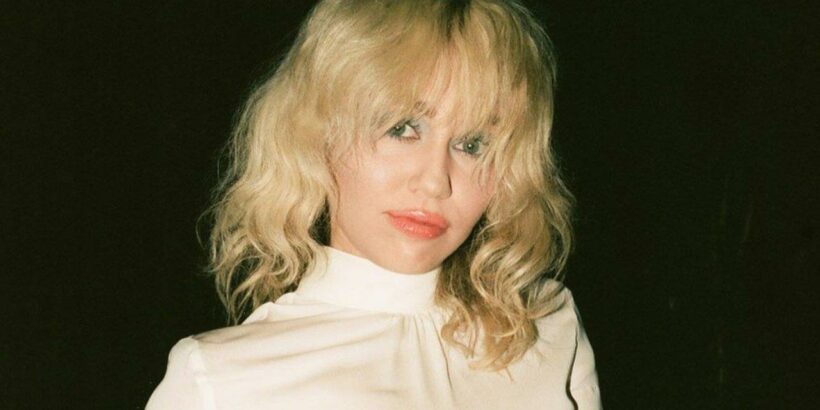 On the other hand, Olivia Rodrigo, Selena Gomez and Saweetie have each shared on their social media accounts their humbled reactions to being nominated for the 2022 Grammy Awards.

AceShowbiz –Miley Cyrus has laughed off her lack of Grammy nominations for “Plastic Hearts”. The star failed to receive a single nod for her 2020 rock and country record – which was number two on the U.S. Billboard 200, and featured collaborations with Dua Lipa, Billy Idol and Joan Jett.

And sharing an article of 30 artists who haven’t received nominations, she quipped on Twitter, “In good company,” along with the metal horns emoji. 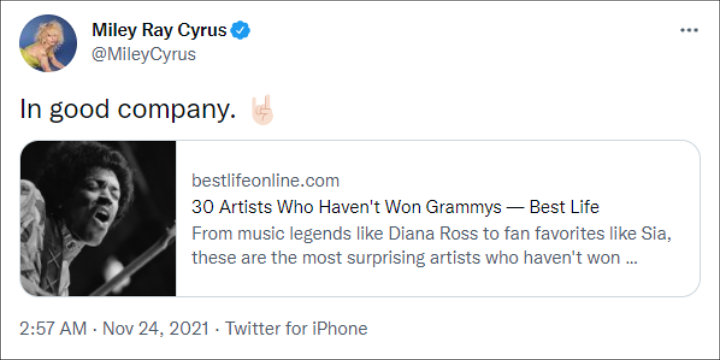 Meanwhile, the likes of Olivia Rodrigo, Selena Gomez and Saweetie have reacted to being nominated for the first time.

The “good 4 u” hitmaker dominates with seven nods and described the recognition as a full-circle moment, as Olivia lived near to the venue the awards ceremony is held at in Los Angeles, The Staples Center, and has always been “fascinated” by its history.

She penned on Instagram, “woke up this morning to 7 Grammy nominations. when I was younger, my family lived a few blocks from the staples center, where the Grammys took place every year.”

“I would always walk outside the arena and look at the plaques on the ground with all the winners names in wide eyed wonder. i went to the Grammy museum so many of my free weekends bc I was so fascinated by the history of the show and all of the incredible musicians that made it up.”

“many dreams have come true for me this year but this one is probably the most meaningful. thank you to everyone who has believed in me and supported the songs I write. and thank you to @recordingacademy for the recognition. I’m beyond humbled. truly a day I will never forget. so grateful aghhh. [sic]”

Selena is in shock that her Spanish-language EP, “Revelacion”, is in contention for Best Latin Pop Album.

She wrote, “Are you kidding me!? Revelacion is nominated for a GRAMMY! This project is so special to me for so many reasons and I could not have made it happen without this incredible team of people by my side. I am forever grateful to each and every one of you and of course MY FANS. [sic]”

She wrote, “2X GRAMMY NOMINATED IKDR !!!!! I’m speechless I wish I had the words to express how I feel but I’m just so grateful!!!!!!! Being acknowledged for all the hard work me and my team have been doing feels AMAZINNNNNG thank you #TeamIcy for stickin with me through thick and thin y’all some real ride or dies IKDR!!!!!! [sic]”