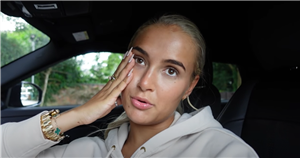 Molly-Mae Hague has opened up to her fans and followers in her latest YouTube video as she urges people to check their boobs and the rest of their bodies for lumps.

Although she has told fans that the lump is "nothing serious", adding she doesn't want it to be a "massive thing", it comes after she raised concerns at the doctors as her lump started to grow.

Speaking on her YouTube channel, she told her followers that she had found a small lump in her boob, hailing herself a "walking health disaster".

She said: "I don't want you guys to think I'm a hypochondriac, it's not that at all. I feel like I'm very aware of my body now since I started to take better care of it."

Molly-Mae added: "I basically noticed a little lump in my boob, went to get it checked and it was completely fine, completely benign.

"It's a little thing called a fibroadenoma and it’s a normal thing to get at this age, small lumps can happen all the time it doesn’t mean they’re sinister."

She explained that she had been noticing it more in her clothes and she was starting to feel it and felt that it had grown, so she returned to the doctors.

"It was not very nice actually considering I'm afraid of needles, but I thought there's not really a way around this."

She added: "I promise it's nothing serious, I don't want it to be a massive thing. I think it's important that I share this with you guys.

"It's an important subject and we should all be checking our boobs and checking for lumps so we can do things like this."

Molly-Mae promised her followers that they would receive an update once Molly has more information and once her results are back.

The influencer has been open with her followers about her medical concerns since she left the Love Island villa, with her sharing news continuously with her YouTube subscribers.

Last year Molly-Mae had a cancerous mole removed after she initially raised concern to two doctors who told her the mole was fine, but a third instantly told her it needed to be removed.

At the time, she found out the mole was a type of skin cancer, malignant melanoma, which was later removed.