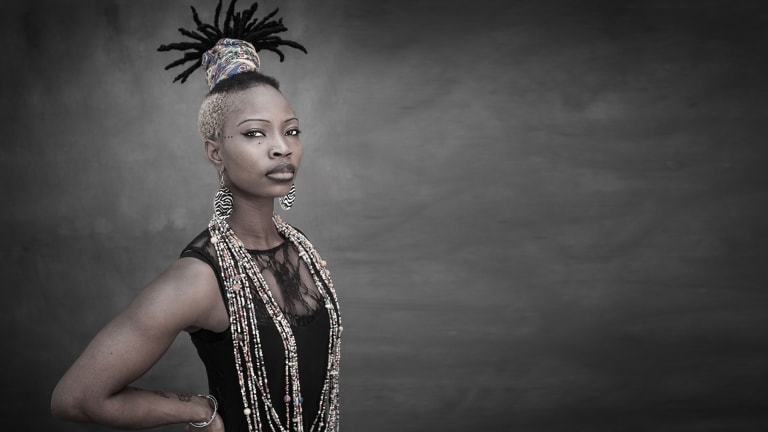 The Ivory Coast singer Dobet Gnahore startles with her inventiveness.

Dobet​ Gnahore's​ blistering, tightly woven fifth album is full of imaginative flourishes built upon sinuous rhythmic foundations. The daughter of a famed percussionist from Ivory Coast, Gnahore​ is a skilled multi-instrumentalist, but here she focuses almost entirely on singing. However, the complex, layered percussion, both acoustic and digital, is impressive even by West African standards. Gnahore's​ superb vocals cover a broad spectrum of moods and influences, at times reminiscent of Amy Lee, Bjork​ and the high-voltage soaring of French pop stars like Daniel Balavoine​; moments later evoking the trills and ostinatos of Central African Pygmy choirs. Highlights include the opening Djoli​ (its rumbling bass line adding a menacing element to an otherwise catchy pop song), the bluesy Lobe (featuring traditional fulani​ flutes set against an accordion/guitar blend reminiscent of classic 80s Soweto music), and the title track, with its changing tempos, classic rock sense of urgency and saturated guitars. It doesn't all work: Le Monde and Love err on the side of cheesiness, especially the latter with its bland English lyrics, but, overall, Mizikisparkles and startles with its inventiveness. EUGENE ULMAN​

The second solo set from United States artist Kiley Lotz​ (who records under the name Petal) could, on paper, sound like a difficult listen. Known for her lean-in-close, heart-on-sleeve songs, here she tackles two huge life events spread over the album's two halves: first, moving from a small Pennsylvania town to New York, and then having to return to enter treatment for depression and anxiety. But if this sounds bleak, the delivery is more like a hug from a knowing friend. Tightrope is a delicious slice of 1990s slacker alt-rock, and Lotz​ delivers such a cohesive sound you would never guess she plays every instrument other than drums. There are moments of sublime melancholy, such as the sparse Comfort and Shy (on which Lotz's​ voice both stuns and cuts deep) and the piano ballad Something From Me. While the album has a defined concept, there are also underlying themes – lost love(s), self-doubt – all subtly and lovingly laid over seriously good pop hooks. And for someone who has struggled with playing music before ("They say, 'Hey man, you were great'… And maybe tonight you could barely even play," she sings on opener Better Than You), Lotz makes it sound deceptively easy. BRONWYN THOMPSON

SUGAR MOUNTAIN (I Oh You)

"You don't like rollercoasters – how could you ever love a girl like me?" sings Holly Rankin, the Australian singer-songwriter who operates under the name Jack River. That is the arresting opening line of Fool's Gold, a twinkly, throbbing song with a steamroller chorus. Not for the first time on this debut album, Rankin's voice is reminiscent of Gwen Stefani's​: effervescent and jumpy, with slight hiccups at the edges. The accompanying album bio claims Rankin's impetus and inspiration was the limbo she entered following the death of her sister 11 years ago in a freak accident. Her Smile seems to be the most direct song in this vein. "You're going somewhere I can't go," she sings over fragile acoustic guitar picking, before guttural bass and spooked strings provide a sepia wash. Despite that heavy backstory, she's more pop bowerbird than serious young insect: So High takes a big bite out of Lana Del Rey; Limo Song co-opts the whistling and guitar twang of spaghetti western soundtracks. There is a sense Rankin is trying on different styles to see what fits, and while that certainly showcases her versatility, it also diffuses the unified artistic impact that was promised. BARRY DIVOLA

Put on this album and slide through a rent in time and space to another world. Matt Keegan, always an exceptional saxophonist, shows ever more intriguing compositional​ ambitions, Vienna Dreaming being dedicated to his pianist forbear, Heini​ Portnoj​, who had to flee the City of Music due to the rise of Nazism. Keegan has sought to braid together an elegant past of acoustic salon music and a jutting modernity of electric instruments and improvisation. The juxtaposition could be jarring, but Keegan conjures an effect more like the phantom of then and the phantom of now dreamily swimming in the same pool of wit, beauty and wistfulness. That he has achieved this with just a quintet is testament to the colouristic​ range the five players offer. Keegan's own saxophones (including his mighty baritone), clarinets, effects and synth​ are joined by Matt McMahon's piano, Dave Rodriguez's guitars, Hannah James's double bass, Miles Thomas's drums and percussion, and, crucially, Mary Rapp's​ cello. That this is so different from Keegan's ongoing Three Seas collaboration with West Bengali folk musicians is a tribute an imagination that dares to hear the improbable. JOHN SHAND

There can be few artefacts more guaranteed to produce soggy baby boomer nostalgia than this lost recording. Yes, it really is Jesus Christ Superstar live at the Capitol Theatre, Sydney, 1973, and it features all those performers whose careers got a huge boost from the show: Jon English as Judas, Marcia​ Hines as Mary Magdalene​, John Paul Young as Caiaphas​, Reg Livermore​ as Herod​ and, already a star, Stevie Wright as Simon Zealotes​. And, yes, all those catchy "toons" surface from the singalong depths of the fast-fading memory bank: Everything's Alright, Superstar, King Herod's​ Song, What's the Buzz and I Don't Know How to Love Him. This is the first time any live recording featuring the Australian cast has been released. Why? Well most people had already bought the very superior London studio recording featuring Deep Purple's Ian Gillan, Murray Head, Yvonne Elliman​, Gary Glitter, Manfred Mann's Mike D'Abo​ and most of Joe Cocker's Grease Band. Secondly, the technology in 1973 just wasn't up to the task of offering a really good recording of a live concert. The result: finally, the release of a little piece of Australian musical and theatrical history. A curiosity. BRUCE ELDER

For years Bebe​ Rexha​ has existed on the periphery of pop stardom, and Expectations, her debut album, presented an opportunity to shatter the industry's long-standing indifference towards her. Even its title invites listeners to leave their expectations at the door, but, disappointingly, it delivers the same predictable pop formula that has made Rexha​ seem such a throwaway musician. Enlisting Quavo​ (from hip-hop trio Migos​) on 2 Souls On Fire is an uninspired move that is at best pandering, and at worst, unoriginal. In contrast, the production throughout the record is superb, with flecks of summer guitar riffs and delicately warm piano melodies, but Rexha​ is left unable to mirror its sophistication. Sad, Mine and Pillow are skippable​, cookie-cutter songs, and Rexha's​ vocals can become tiresome and sometimes even strained. One of the few highlights on the album is her first solo top-10 single, Meant To Be, which features Florida Georgia Line – Rexha's​ contribution totalling a 25-second verse! Pop stars are meant to be bold, charismatic and memorable, but Expectations is incredibly unsure of itself. If Bebe​ Rexha​ once appeared to have the makings of a superstar, the reality is that she falls short. KISH LAL