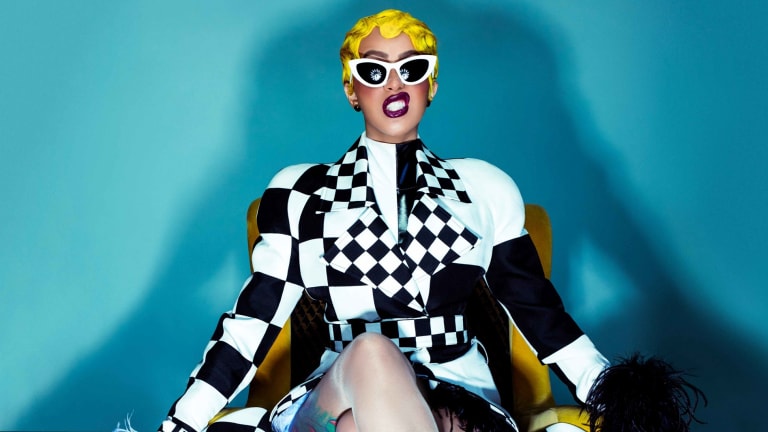 Cardi B: from stripper to rapper with an unscripted personality.

From working as a stripper to becoming the most recognisable pop star in the world, Cardi​ B's rise over the past few years reads like a Cinderella story – or, in her words, a "Binderella​" story. She's paid the price, struggling with the unrelenting eye of the media, and her debut album, Invasion of Privacy, is her retaliation. Breakout hit Bodak​ Yellow had many writing Cardi​ off as a one-hit wonder, but this album is bold enough to solidify her as a real contender in the rap game. The Bronx native, best known for her infectious and unscripted personality, doesn't hold back, opening the album with Get Up 10, an instant hip-hop classic, heaving with intensity. Cardi​ isn't shy with her intentions: "Had to set the record straight 'cause bitches​ love to assume", and each song that follows booms with bravado. Featured artists are in abundance, with highlights from SZA, Kehlani​ and Migos​. Chance the Rapper is a detriment to the record, making Best Life sound like an outdated offcut. Money Bag, She Bad and Drip are perfect bops for the club, whereas Ring and I Like It will turn even complete rap novices into fully fledged fans. KISH LAL

In concert George Xylouris​ and Jim White conjure up a mighty sound for just a duo, given that the former plays lute or lyra and the latter (of Dirty Three fame) a drum-kit. Here that sheer mass often seems like a wall of water: a vast wave of sound rearing up and threatening to crush you where you sit. This is not a matter of how loudly you listen to the album or the way it has been produced, it is due to the sheer intensity of the playing and of Xylouris's​ singing. The latter comes via a baritone voice that could just as credibly emanate from a mouth in the earth of his native Crete as from a man. It is raw and timeless, and the edge of anguish it carries is profoundly truthful. Seven of the nine pieces are penned by the pair, sometimes using an extant poem as a lyric, and two are reimagined​ traditional songs. Each piece is conceived as a sound-world in which to explore fresh sets of possibilities; fresh ways for White's keen instinct for texture and density to interact with Xylouris's​ rolling or spitting instrumental melodies, and when they both catch the same breaking wave of propulsion (as on Only Love) – stand well back! JOHN SHAND

Modern folk music is an incredibly slippery genre. Take England's Josienne​ Clarke and Ben Walker, who are regulars on the international folk-festival circuit, have picked up Best Duo at the BBC Radio 2 Folk Awards, and have toured with Richard Thompson. Their notion of the idiom is a fascinating and complex mix of jazzy elements, sensitive ballads (All Is Myth), pop, hints of alternative country (Things of No Use), lazy blues (Tender Heart) and even wry self-analysis (Chicago – a wonderful self-deprecating song about performing to an audience comprising … no one!). A delicious, winsome melancholy that informs the songs (notably Sad Day) is reminiscent of those 1960s English folk legends Nick Drake and Sandy Denny. Listen to the hauntingly beautiful Ghost Light and know that their music belongs to a style of folk which pushes the genre (via lots of low-key drums and keyboards) into places where traditional folk rarely ventures. It is a comment on their unusual approach that the bonus tracks include a Jackson C. Frank song (Milk and Honey) and a cover of Nina Simone's For All We Know. BRUCE ELDER

In the grand tradition of old-timey country crooning comes Joshua Hedley's debut album, one that aches with sorrow, longing and memories of times spent crying into beers over lost love and wasted opportunity. The opening notes of Counting All My Tears (on pedal steel and acoustic guitar) are enough to convince that this is the genuine article, a feeling cemented once Hedley's deep, dark voice swells over the top. And yet, despite the emotional desolation, this collection of 10 songs twinkles with a certain delight: the kitsch of the title track; the unabashed embracing of a sonic naivety that the likes of Marty Robbins exhibited from time to time; a gentle self-deprecation. Where the album perhaps stumbles just a bit is in songs such as Let's Take A Vacation which are too croony​, not country enough; more pastiche than powerful. These few moments aside, however, Mr. Jukebox is a record of inherent beauty and a particularly fine example of what country music used to be, and what it should still be, today. Hedley is, without doubt or exaggeration, the absolute real deal, and this record is a fine culmination of years of hard work. SAMUEL J FELL

Sometimes the underdog can surprise. Case in point, the 2016 collaborative album from kd lang, Neko Case and Laura Veirs​. Although the least-known of that trio, Veirs​ shone brightest, her songs carrying echoes of Judee​ Sill and the Mamas & the Papas. The Portland singer-songwriter is in fact a veteran, The Lookout her 10th album in 19 years. At first blush, Seven Falls suggests lang's​ influence: the languid country-pop feel, the sighing pedal steel and the gauzy backing "ooh-oohs" are straight out of the Canadian's playbook​. But the bulk of the album dwells more in the world of atmospheric folk, with Veirs' sparkling acoustic picking providing the spine, while her lyrics look to the natural world to convey emotion. This occasionally results in too much weather and geography, but Veirs​ can still turn out a poetic phrase that startles, such as "now she's married to the swell, she's swaying in the shells, a whisper in the waves". It's a ruminative road-trip of an album, with occasional attractions warranting a stop: Sufjan​ Stevens' gentle companion vocals on Watch Fire, the children's shout-out on Lightning Rod, the Twin Peaks-like melancholy piano of The Meadow. BARRY DIVOLA

FOR NOW (I Oh You/Mushroom)

Their 2016 album Hills End received a lot of next-big-thing hype from an Australian industry dearly wanting some international success stories. DMA's​ weren't ready, however. The sounds were too derivative and the songs too patchy. For Now is a clear improvement. Two years of international touring later, Tommy O'Dell​ no longer simply impersonates Liam Gallagher of Oasis; he now has an effective, keening vocal tone that feels more like his own voice. The songwriting, musically, is much more consistent, with a focus on ballads keeping O'Dell's​ vocals front and centre, and along with some prominent synthesiser pads, this means they often sound more like, say, Snow Patrol or The Temper Trap, rather than Oasis. What lets the album down is the lyrics: DMA's​ Britpop​ idols are often quite witty, with music meant to highlight clever lyrics. In contrast, DMA's​ lyrics are a jumbled mess of aphorisms, affirmations, and ineffectual pop cliches. The musical echoes of The Smiths' How Soon Is Now? on the title track, for example, prime you to wish for an occasional pearl of wit among the lyrical muck – but such wishes remain ungranted. TIM BYRON