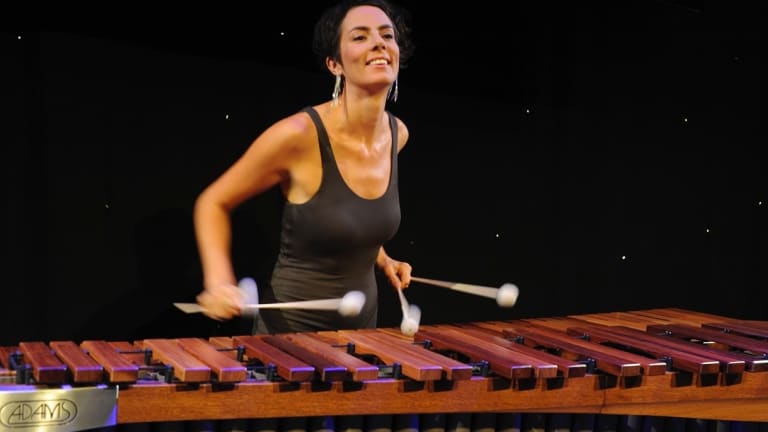 "Clairaudience. Noun. The supposed faculty of perceiving, as if by hearing, what is inaudible. (Compare Clairvoyance)." The fifth solo release of percussionist extraordinaire and new music maven Claire Edwardes features six collaborative works created by an intersection of composers, performers, poets, artists and architects. This is not something to throw on while you're cooking dinner: it's an immersive​ hour which demands (and rewards) active listening. Most of the sounds come from Edwardes and her glorious toolbox of timbres, but the acoustic tangs and bings​ are threaded with layers of electronica to create a rich and confusing sound world. Am I imagining Edwardes faintly humming? Or is it a digital modification of the acoustic noises? A voice over? Or perhaps something more mysterious, something not really there …? Above all, there's more to this recording than meets the ear. Best experienced in a single sitting, Clairaudient​ takes you from Vincent Ho's delicate Nostalgia through to Steve Reich's dizzying Vermont Counterpoint, via the music poetry of Melody Eotvos​, the dry, pacey Work from Marcus Whale/Tom Smith and Damien Ricketson's intro-extro-spective Time Alone. It's quite a trip. HARRIET CUNNINGHAM

Some couples are so different from each other you wonder how the hell their relationship works. Violinist Jon Rose (for 40 years an epicentre of Australian free improvisation) and pianist Chris Abrahams (one third ofThe Necks) are a bit like that. Often you feel this tension – almost a tug of war – pulling the music in two directions at once, and yet rather than undermining the outcome, it is precisely what makes the music so compelling. Whereas Rose tends to extrapolate an idea in the least expected direction, Abrahams pursues more overtly logical sequences, yet still eschews predictability. He grounds the music to some degree, implying harmonic contexts; he holds the kite, if you like, while the violin is the kite. And what extraordinary sonic acrobatics it executes. Rose still finds sounds and combinations that have the thrill of the new, and that explode into showers of unforeseen options. Meanwhile, Abrahams can make such telling statements with so few notes, and then suddenly open a gate on to a lush melodic garden just as improbable as Rose's sonic starbursts​. Furthermore, just as Rose can startle with a sudden glinting beauty of tone, Abrahams can flirt with noise as music. JOHN SHAND

Without quite becoming a household name, Great Lake Swimmers have had a solid impact across their 15 years of releasing records. Why, even mega-pop-star Josh Groban​ incorporated the Canadians' Changing Colors​ into his 2011 tour. A vehicle for talented singer-songwriter Tony Dekker, Great Lake Swimmers don't veer far from the blueprint on their seventh album, delivering another set of stunning, slow-burn indie-folk that is both haunting and gloriously beautiful. Opener The Talking Wind is a stunning introduction, relying solely on woodwind instruments and layered vocals, and one that makes the comparisons to Sufjan​ Stevens and Nick Drake valid. Dekker had become disillusioned with acoustic-guitar folk music, and the risk to make an album largely without that as its backbone has paid off: pretty ballad Falling Apart stands out because of a cascading chimes melody; standout Mouth of Flames carries a brevity delivered by a subtle but ominously-toned strings arrangement. There's no doubt a lot of thought has gone into The Waves, The Wake, but instead of feeling poised and self-aware, it is Great Lake Swimmers' most intimate and resonating release. BRONWYN THOMPSON

BE THE COWBOY (Dead Oceans)

Displacement, loneliness and longing artfully permeate indie paragon Mitski​ Miyawaki's​ fifth studio album, Be the Cowboy. Mitski and long-time producer Patrick Hyland take a chance with a pivot from distorted guitars to glossy synths​, but never lose sight of their strengths. This intentional evolution of her music is saturated with a strength and fervour that feels palpable on A Pearl, which interweaves horns, strings and melancholy. Mitski's​ multiplicities​ are on show like never before. There is joy in her insecurity (Why Didn't You Stop Me?), whimsy in her loneliness (Lonesome Love) and desire in her fantasies (Me and My Husband). Born in Japan, Mitski​ lived in 13 different countries while growing up, and today relies on a string of Airbnbs​ to call home. Her permanent displacement reverberates on the album. Nobody is filled with a loneliness that sings to both a teenage romanticised​ isolation and to the reality of adult seclusion. Closing the album with Two Slow Dancers, a song that could easily slip into any '80s movie soundtrack, Mitski​ once again pushes her own boundaries. Be a Cowboy just confirms what we already knew: Mitski​ is an indispensable innovator of indie rock. KISH LAL

The link to Paul Grabowsky's​ brilliant 2014 release The Bitter Suite is plain. Listen to the inky darkness that shadows the notes; that charges the mood variously with portentousness, melancholy or desolation; that lurks behind each line, or just around the corner from a jauntier moment – much as life likes to slap you down if things start to go too well. Again Grabowsky​ has assembled a sextet to realise these challenging, disturbing sonic visions, but one with no overlap to the Bitter personnel (beyond himself), and if anything the chosen players and instrumentation compound the storm-cloud weight in the air. Besides his own startling piano contributions, the featured soloists are violinist Erkki​ Veltheim​, whose exceptional improvising has routinely shown a predilection for eeriness, and Scott Tinkler, whose trumpet playing so often carries a sense of anguished, meteoric light blazing through opacity. Another spooky influence is Peter Knight's electronics, which only deepen the musical shadows, while bassist Philip Rex and drummer Dave Beck lend the grooves a combative edge. It's hard not to hear Grabowsky's​ Eastern European blood infusing the daring compositions on this digital-only release. JOHN SHAND

Amber Fresh certainly knows how to create an atmosphere. The West Australian songwriter inhabits an ethereal sonic space where '80s dream-pop collective This Mortal Coil meets the hushed, confessional delivery of Cat Power and Holly Throsby. As Sheryl​ Sandberg would say, "Lean in." This is not music that's going to grab you by the scruff of the neck and demand to be heard. Instead, clusters of slowly see-sawing piano arpeggios float in an echo chamber, with Fresh murmuring sweet somethings such as, "You're sad now, but you'll be happy, saw it in the clouds." Zigrid​ builds on descending hummed harmonies and clicking percussion to create a drone, while 11, 12, 13 stretches whirring pump organ and layered whispers for almost nine minutes. There's a determined fragility at work here and, although this is obviously an intimate and personal collection, it's not always easy to gain entry when straining to grasp mumbled lyrics or trying to latch on to songs that linger for a while then disappear like smoke. "I wanna touch you, I wanna hear you, I wanna hold you," Fresh sings on Interstate, and the listener could be forgiven for making the same pleas for connection. BARRY DIVOLA​