Josephine Foster's kaleidoscopic talent has sprawled in diverse directions since she began releasing music nearly 20 years ago. On one hand the American is capable of Jefferson Airplane-esque psych-rock with 2004's All the Leaves Are Gone, and on the other she is delicate enough to set to music the poetry of Joyce, Lorca​ and Dickinson. She has even released an album for children. Faithful Fairy Harmony, a double album, is at the quieter end of the Foster spectrum, a collection of highly literate, hushed and mysterious songs that evoke Vashti​ Bunyan, Joanna Newsom and, in the album's sumptuous harmonies, Kate and Anna McGarrigle​. While the production may be scruffy (though warm), the melodies are expertly tight: indeed some evoke songs from Sherman Brothers musicals – think the winsome lullabies from Mary Poppins​ or Chitty Chitty Bang Bang, albeit with more darkness. The finest moments see Foster at her most beautifully melancholy, with The Virgin of the Snow and Challenger. Throughout, muffled piano sits alongside wonky guitar, autoharp, and the mournful pedal steel of Chris Scruggs​ (Earl's grandson) on an album of raffish, unconventional folk music from a consistently beguiling artist. BARNABY SMITH 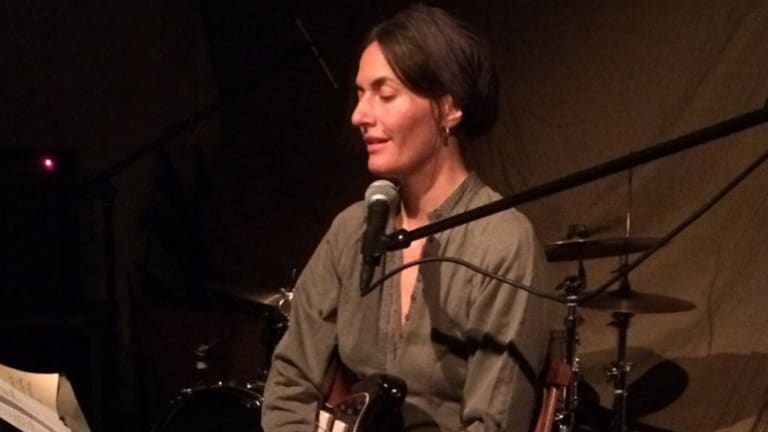 Following an underwhelming big-band collaboration, We Are All sets Phronesis​ back on course in the quest to miniaturise and yet intensify a piano/bass/drums trio's interaction. It's not just that bassist Jasper Hoiby​, pianist Ivo Neame​ and drummer Anton Eger​ are dazzlingly original instrumentalists, it's that they've collectively pushed the format's reset button, so neither piano nor drums clog up the frequency and dynamic spectrums. Instantly Hoiby's​ mighty bass has more room to converse, without needing to be either busy or pushed forward in the mix. They fuse the gentle art of restraint with that of improvisational abandon. Obviously the three compose with this outcome in mind, and the pieces are fascinating in themselves. Eger's​ elegiac The Edge, for instance, initially gives the bass primacy to monumental effect, while the piano and drums dance about it as lightly as spirits. It's this core instinct for minimalism from Hoiby​ and Neame​ and for labyrinths of little sounds from Eger​ that make this another thrilling instalment in the development of one of the world's great bands – although these qualities are somewhat negated by the use of keyboards on the closing The Tree Did Not Die. JOHN SHAND

These days a mainstream album is increasingly a package of content aimed at making money on streaming services. Albums are getting longer: because record companies make money per play, the more songs on an album there are to play, the more money. Similarly, track orders no longer matter; instead albums are about containing content aimed at getting on to popular playlists. On A Brief Inquiry into Online Relationships the 1975 know the score. One song is acoustic folk (the excellent, desperate Be My Mistake, which would sound fine on a playlist next to Ed Sheeran), while the next, TOOTIMETOOTIMETOOTIME​, evokes the likes of Justin Bieber​, thanks to Matty Healy's clean tenor and some "dolphin noises". How to Draw/Petrichor​ might fit on an ambient post-rock playlist, while Sincerity is Scary might sneak on to neo-soul revival playlists (were it more convincing). Underlying it all is enough of a sardonic emo sensibility to make it feel like rock; song titles like I Always Wanna Die (Sometimes) would pass unnoticed on a My Chemical Romance record. It makes no sense as a coherent record, and the first half is considerably stronger, but the 1975 are just living in 2018. TIM BYRON

Performer, composer, activist and founder member of Pink Floyd​ Roger Waters has gone over to the dark side. Not just any old dark side. The classical dark side. Using a compelling speaking voice, a nifty facility for accents and a deep understanding of words and music he has recreated that spiky, spooky early 20th-century favourite, The Soldier's Tale, and it's an absolute cracker. An adaptation of a Russian folktale, dreamt up by Russian emigre Igor Stravinsky​ and Swiss poet Charles-Ferdinand Ramuz​, this punchy work for seven-piece band and narrator premiered in 1918. A century later Waters revisits it, with a little help from his (unnamed, uncredited) friends of the Bridgewater Chamber Music Festival. Waters voices all the characters, ably switching between the soldier's gruff northern accent and the devil's Mittel-European twang. Meanwhile, the band spin up Stravinsky's​ clunky, funky soundtrack with a clarity and edge that makes you catch your breath. This is a seriously good recording of a work which, even in 2018, does not grow old. Classical? Who cares? This is music-making and story-telling of the highest order and I dare you to listen all the way through without feeling a delicious shiver down your spine. HARRIET CUNNINGHAM

Texas rapper Yella​ Beezy​ survived a drive-by shooting weeks ago. Remarkably, he has released his most refined project yet, aptly titled, Ain't No Goin' Bacc​. The 26-year-old was virtually unknown outside of his home town until he received an invitation from Beyonce​ and Jay Z to open their On the Run II show in Dallas this September. His breakout single, That's On Me, finally gained attention a year after its release, most notably from major-label veteran LA Reid, who signed the rapper to Hitco​ Records. On this mixtape​ That's On Me receives a fresh remix with heavyweights 2 Chainz​, TI and Rich The Kid lending bars on the breakout hit. Ain't No Goin' Bacc​ plays out as a prophecy of the life Beezy​ is well on his way to living. "Diamonds on me blingin'" he raps on So Much Gucci, "so humongous​ (so humongous)." Flaunting wealth and braggadocio are pertinent to hip-hop, but Beezy's​ Dallas spin on it feels fresh. Despite having all the right moving parts – impressive guest features and a Beyonce​ cosign​ – nothing on the album comes close to being as captivating as his single. Hopefully his new label and industry friends lead him somewhere better. KISH LAL

Remember when Mumford​ & Sons dropped the banjos, slipped off the waistcoats and picked up electric guitars and donned leather jackets for their last album? Don't worry, they've probably chosen to forget it as well. Instead of a predictable return to the hey-nonny-nonny folk stomp-alongs of 2009 debut Sigh No More, on Delta they turn inwards. The first half of this overlong fourth album is a blur of earnest, tinkly songs, sometimes fitted with overblown climaxes that actually make you appreciate how hard Coldplay​ tries to write memorable tunes while using similar tricks. The band paints its palette grey and greyer​, as singer Marcus Mumford​ moans vaguely about guiding lights, last hopes, October skies and no more questions, no more lies. The back half of the record offers more dynamics – aided and abetted by mega-producer Paul Epworth (U2, Adele and, of course, Coldplay​) – but few revelations. Picture You is the kind of R&B-spiked pop Ryan Tedder makes by the metre; If I Say ladles on bombastic symphonics; Darkness Visible quotes passages from Paradise Lost. Ultimately Delta strains for a sense of gravitas, but too often it captures the sound of navel-gazing rather than soul-searching. BARRY DIVOLA​