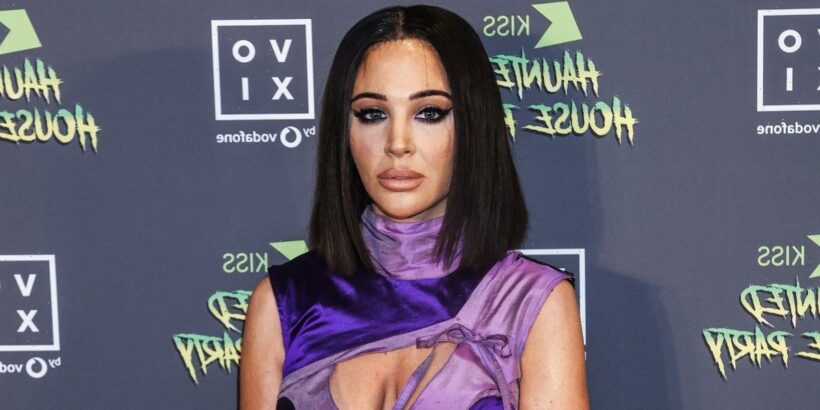 N-Dubz star Tulisa had a mobile phone thrown at her head during a recent performance following a years-long hiatus.

The singer, 34, was joined on stage by band mates, Dappy and Fazer after the trio reformed aid the release of their new single Charmer.

Tulisa is seen sitting on the side of the stage singing into a microphone during a performance at the OVO Hydro Glasgow when she is suddenly pelted by a mobile phone.

READ MORE: X Factor star reveals she had 'months of secret auditions' before being put on camera

Every the professional, the star shunned it off and kept performing to the screaming crowd.

A video of the incident quickly made the rounds on TikTok, with viewers horrified at the savage attack.

Another added: “That coulda split her head open.” While a third said: “it's fine she was lucky it wasn't a Nokia 3210.”

The band’s new hit Charmer features their trademark storytelling via the slick raps of Dappy and Fazer, alongside the sassy vocals of Tulisa.

The track was written by the band and produced by Rymez, who is most known for his work with the likes of Stefflon Don, D Block Europe and Adekunle Gold.

Tulisa recently wowed fans as she stepped out in a cut out silk and leather ninja costume at the VOXI Presents KISS Haunted House Party last month.

The singer looked incredible in her ensemble ahead of taking to the stage at the bash which was held at London's OVO Arena in Wembley Park.

The star flashed her cleavage in a ripped blue and purple silk high necked top which she teamed with a leather black skirt.

Tulisa was joined by her N Dubz bandmates Fazer and Dappy on the red carpet ahead of taking to the stage together to perform their hits.

The band enjoyed more than a decade of chart success before disbanding in 2011, after which Tulisa traded the cargo pants and trainers for elegant evening dresses while serving as a judge on ITV show The X Factor.

Their two albums, Uncle B and Against All Odds, were certified platinum in the UK, while hit single Number One – a collaboration with Tinchy Stryder – hit No.1 on the British Singles Chart.