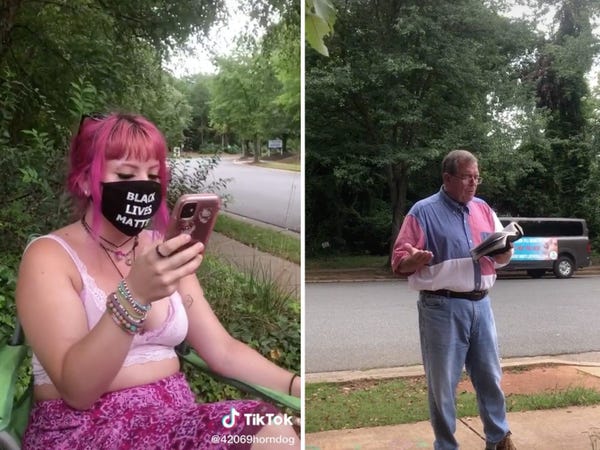 Two North Carolina teens are going viral for their unorthodox response to an Evangelical Christian minister protesting outside of an abortion clinic in Charlotte.

Hannah Bauerle and Alex Cueto met this summer while volunteering with Charlotte for Choice, a non-profit volunteer organization that mobilizes to keep abortion care safe and legal while providing support to patients seeking abortion services. The 19-year-olds work as "defenders" at a nearby independent women's health clinic, escorting patients through crowds of vocal protestors — often posting footage of their efforts and run-ins with protestors on TikTok.

In their most recent viral clip, which Bauerle filmed and posted, Cueto reads the lyrics to Cardi B and Megan Thee Stallion's hit single "WAP" in response to protests from Phillip "Flip" Benham. Benham is an evangelical minister who founded Operation Save America, an organization that opposes abortion, Islam, and homosexuality. Operation Save America confirmed to Insider that Benham was the protestor featured in the video.

In just two days, the video has racked up over 1.8 million views and thousands of comments from amused viewers praising the women's "performance art."

Cueto says she felt that Benham could learn from the lyrics.

"WAP has gathered a lot of attention because it's a song made by women [about] reclaiming our bodies and talking about our own female anatomy, rather than what society is used to — men talking about women's bodies," she told Insider. "I figured Flip hadn't been exposed to the song yet and should hear it."

The action was also strategic.

Clinic escorts and defenders, she said, will read a variety of texts, including "So You Want To Talk About Race" by Ijeoma Oluo, to change the conversation and direct attention and away from patients entering the facility.

Benham told Insider that he was not familiar with either TikTok or "WAP," but confirmed that he had been protesting outside the clinic since the summer of 2002 and had interacted with the women for "the past couple of months."

While the women weren't anticipating viral attention for the recent video, they're pleased to have a platform to share their work.

Cueto says she's posted "better videos" in which she actually debates and engages protestors in more substantive conversation, but she's glad the video's visibility is revealing the "nonsense" taking place outside the facility.

"People attack, harass, and, in some cases, stalk people that get or support abortions," she said. "But amongst all the gaslighting, manipulation, and sexist, racist, and otherwise vile things that these anti-choicers say to us, the other volunteers are so determined to defend patients."

Bauerle says the video has been so popular because it's "hilarious and confusing" — but her videos are making a larger impact online.

"I realized pretty fast that people enjoyed the content because a lot of viewers had experiences with people similar to those I see at the clinic," she told Insider. TikTok became a platform for awareness about what is going on in front of clinics everywhere and it was pretty sick."