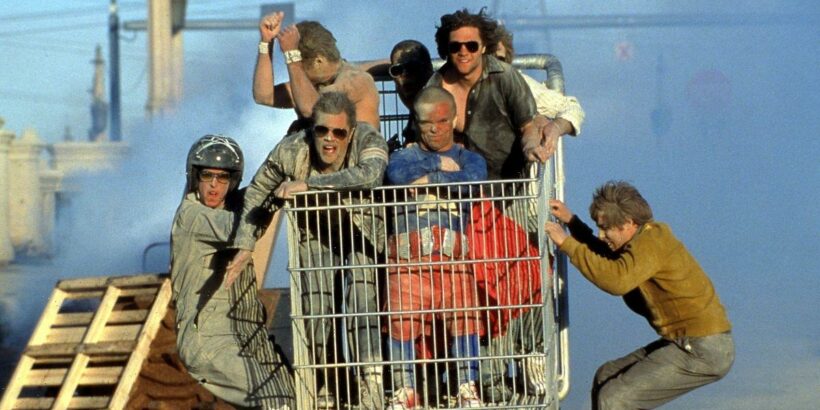 The world welcomed to the screen 10 men behind the iconic MTV show, Jackass, back in 2000.

After the show ended in 2002, there were many spin-off films filmed based around the shows featuring many of the original stars.

Arguably the biggest success to come out of Jackass was Johnny Knoxville.

The no-shame comedian has appeared in all of the Jackass films and a number of other movies such as the Dukes of Hazzard and The Last Stand.

From two members of the cast dying, rehab stints, addiction battles and arrests, the cast have been through it all.

Jackass Forever is the fourth film in the popular franchise and stars original cast members from the hit MTV series including Johnny Knoxville and comedian Steve-O.

As the film hits the screens, Daily Star has taken a look into the lives of the original stars.

Ryan was a fixture on the epic show but was tragically killed in 2011 at the age of 34 after he crashed his Porsche 911 GT3, with it being discovered he had been drink-driving.

The horrific accident happened just hours after Ryan had been drinking at a local bar.

Authorities recorded how his blood-alcohol level was determined to be 0.196 — more than twice the legal limit to drive.

The passenger in the expensive car, Zachary Hartwell, 29, was also killed. Zachary was a production assistant on Jackass Number Two.

The pair were heading back from the bar in West Chester when Ryan, who was a stunt-double, veered off the road and struck a tree.

Tragically the Porsche burst into flames in West Goshen Township, Chester County, Pennsylvania and the pair both died.

The police report stated "speed may have been a contributing factor in the crash" and preliminary investigations suggested the car had been traveling between 132 and 140 miles per hour (212 and 225 km/h) in a 55 miles per hour (89 km/h) zone.

Although things may have seemed all busy schedules, sexy women and laughs with Johnny, there was another side to his story after his Jackass fame.

Years after the show wrapped in 2009, on January 15, Johnny caused chaos and controversy at Los Angeles International Airport.

Security workers found an inert grenade in his carry-on luggage. He was immediately detained by authorities and was cited for carrying a prohibited item into the airport.

Following the investigation when it was determined that the item was a prop from an advert, and that an assistant had packed his bag for him, he was released.

A month later on February 4, 2009, Johnny explained on The Howard Stern Show how he went through hell after he tore his urethra during a stunt for Nitro Circus, describing how he had to flush it twice daily.

He said this was done by "sticking a tube into his penis all the way up to his bladder", referring to the practice of urinary catheterisation.

Johnny said the process prevented scar tissue from forming and performed the procedure "twice a day for three and a half years" after the injury.

Bam joined Jackass in the early 2000s and went on to create the Jackass spin-off shows Viva La Bam and Bam's Unholy Union and co-wrote and directed his films Haggard and Minghags.

The star has also tragically battled alcohol addiction for years and has confessed to being an alcoholic after he publicly asked for Dr Phil's help in 2019.

However, things took a turn for the worst in July 2009 following a four-day drinking binge which saw Bam taken to hospital.

He entered rehab for the first time in December 2009 after an intervention from his friends and family but did not complete the program and left after only four days.

In November 2017, he discussed his alcoholism battle again, claiming that he had been "mostly sober" since 2015.

However, he entered rehab for a third time in January 2018, after a DUI, and remained sober for seven months.

Tragically Bam's story doesn't end there as later that year he relapsed after being robbed at gunpoint during a holiday in Colombia.

A year later he tried rehab again for the fourth time but left after 10 days, stating that he "didn't belong there", and was planning on beating his alcoholism on his own.

In March 2019 his loved ones came together to have him committed to a mental health treatment facility.

He was released from treatment and returned home after one week.

Stuntman and overall entertainment legend Steve-O joined forces with the cast of Jackass in 2008 for the Jackass MTV 24 Hour Takeover.

But in that same year, the star sent out an email on March 9, 2008, to his friends suggesting that he was suicidal.

Concerned for his welfare, pals contacted physician Dr Drew Pinsky, who told them to get Steve-O to a hospital immediately.

He was placed on a 72-hour psychiatric hold which was later lengthened to 14 days due to an alleged suicide attempt.

The star has since spoken out on how he thought his drug use and bipolarity was a "good thing", but that he now realises that his drug use was apparently "hurting" those he loved most.

He avoided jail with the successful completion of a treatment program.

Another Jackass star who died too young was Stevie at 54 years old.

Stevie, who was nicknamed "Puppet The Psycho Dwarf", appeared in Jackass 3D – the third big-screen outing of the show in 2010.

In his memory, his heartbroken family revealed a GoFundMe had been set up.

The statement on the page from his family read: "Steve 'Puppet The Psycho Dwarf' Lee Richardson unexpectedly passed away on Wednesday, September 9, 2020 at his home in the morning.

"He was beloved by many and has many friends that were family, fans that adored him, but only his brother Jim left to take care of final arrangements.

"Puppet has put smiles across the world with his hardcore attitude and lifestyle.

"He is a legend in the art of Midget Wrestling.

"He needs our help to give him one last curtain call.

"Please donate what you can, share his memories with everyone, and share this fundraiser to give the Psycho Dwarf the best resting place possible."

While many of the stars appeared to be surrounded by doom and gloom, many of them went on to focus on their careers.

One of those Jackass stars was Chris Pontius who had been on the show since the first-ever episode and quickly became a fan-favourite.

He was known as "Party Boy" and "Pontius The Barbarian", and the stunt performer has quite the extensive acting career away from the show.

He appeared as an Irish Dock Worker in Charlie's Angels: Full Throttle and as Jesus in National Lampoon's TV: The Movie.

Chris also had roles in sitcom Raising Hope in 2012 and Netflix comedy Game Over, Man! in 2018.

In 2019, Chris became a father for the first time when his son Axe was born.