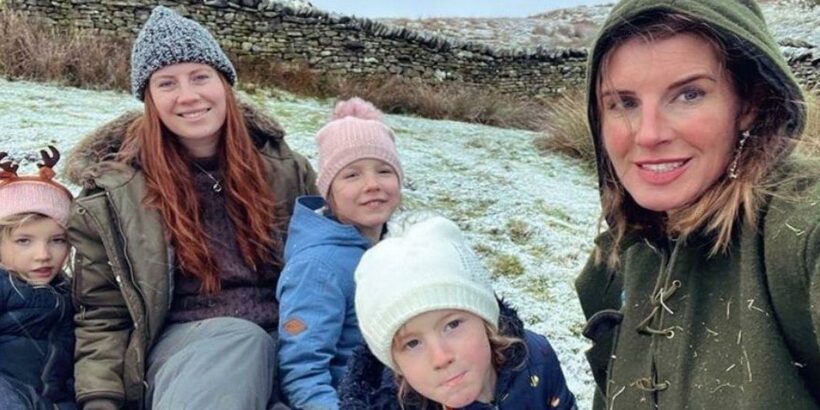 Our Yorkshire Farm star Amanda Owen experienced a traumatic time during the festive season, after her daughter Nancy had an accident on Christmas Day.

The Yorkshire Shepherdess, who shares nine children with her husband Clive Owen, explained the terrifying details on Twitter after Nancy, 4, "swallowed a biro".

But Amanda, 47, was quick to reassure her followers that her daughter was fine but was "just spitting ink".

Posting a picture of her children on the social media platform, the star also listed the other calamities she faced on Christmas Day.

"Sid abandoned on loft as he knocked ladder away with straw bale.

Reading that Nancy had a misfortune during Christmas, Amanda's followers rushed to the tweet to ask if Nancy was okay.

One follower wrote: "A biro? That’s scary! Did she bite it or something?! Hopefully she’s still okay bless her.

Another said: "Yikes Lots going on there. Merry Christmas."

A third penned: "I hope Nancy is alright. Sounds eventful but fun. My boys had to try the ponies’ salt lick too."

"Hope you and Clive are sitting down to a well-deserved enjoyable glass of wine or two," a fourth chimed.

Providing viewers with insight into their family life and what they get up to has certainly proven to be a hit and has created a solid fan base for the Owens.

Speaking to the Yorkshire Post about the programme, Amanda previously said she has "no regrets" on allowing her family to take part.

She explained: "I think it is important that people see the reality of living on a farm.

"We are just a normal family dealing with everything life throws at us and the programme is life as it’s happening, whether there’s someone filming it or not and that’s what keeps everybody grounded.

"It is hard work being a farmer and I will do everything it takes to provide for my family and that means having a lot of fingers in a lot of pies in order to make a living."