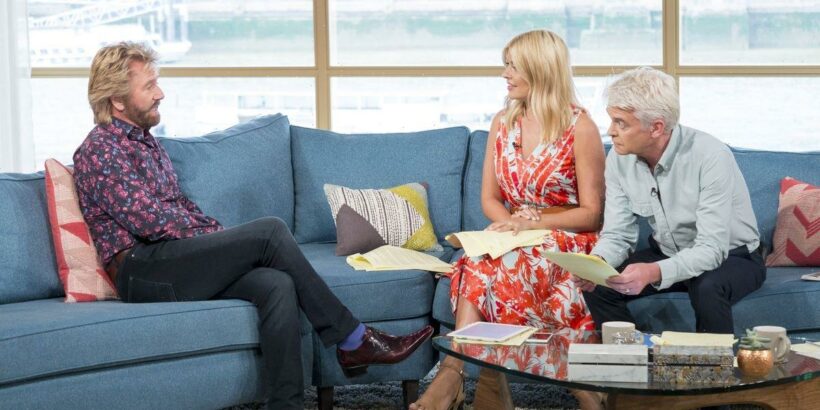 Phillip Schofield is one of the most famous faces on our TV screens – but he has also had a number of alleged feuds throughout the years.

From a Noel Edmonds interview row, to addressing his 'feud' with Piers Morgan in his 2020 autobiography, Phillip Schofield has spoken openly about the supposed arguments.

Other stars have also spoken about the feuds, with some addressing them as completely false, while others have hit out at the This Morning presenter live on air.

In 2016, Noel Edmonds was questioned by This Morning presenters Philip Schofield and Holly Willoughby over a tweet that Noel had sent to a cancer patient, where he asked if their "ill-health was a result of their negative attitude".

Noel himself had been previously diagnosed with prostate cancer and told the hosts that "negative energy" was to blame for his prostate cancer diagnosis, but claimed he'd cured himself with a £2,300 electromagnetic pulse device and "positive energy".

Philip Schofield then said: "Obviously people are going to get a little bit sceptical when you’re banging on about this £2,300 box – and you know the people who make it!"

However, Noel later added: "I don't say cancer was caused by the stress, but that my health deteriorated to such an extent I got prostate cancer. I am absolutely sure the negative forces acting on me impacted on my health.

"There is a wealth of information from various clinical studies of a direct link between stress and cancer. I am absolutely certain there was a link in my case."

Both Noel and Philip later exchanged a heated conversation about the row on Twitter a few months later.

In his 2020 autobiography Life's What You Make It, Philip Schofield has since addressed the row, saying that Noel Edmonds was one of his TV inspirations, but "sadly, many years later, he and I would strongly disagree over an interview on This Morning when he suggested that ‘negative energy’ could cause cancer.

"I still take a different point of view to Noel, but I think it’s a terrible shame we fell out over it."

In 2008, fans became concerned after Kerry Katona appeared on This Morning and was appearing to slur her words during an interview with Philip Schofield.

Following the interview, Kerry Katona has since revealed that the backlash she faced was "just awful," telling the Marnie's Home Truth's Podcast that hosts Phillip Schofield and Ruth Langsford never once asked about her mental health, after revealing she had been diagnosed with bi-polar disorder.

Reflecting on her appearance on the programme, she added that she was slurring her words due to medication she was taking at the time, adding: "That was pure bipolar medication."

The star later refused to appear on This Morning for over 10 years, but Kerry has said that she and Phillip have since become close, and that there is no feud between them.

Although reports of a feud were alleged, Kerry hit back at media reports in an Instagram post, saying: "Hang on a minute…I have NOT been feuding with Schofe for 13 years at all!!!! I absolutely adore Phil!

"My point of the story was how far we’ve come when talking about mental health!"

Kerry added: "Philip has always been so lovely, not with just me but my kids too… so please don’t believe everything you read! This has been completely twisted."

Phillip Schofield also replied to the post, saying: "Thanks darlin’, what can ya do eh. Sending loads of love and see you soon xx."

In 2019, it was reported that Amanda Holden alleged that she lost out the chance to host This Morning because of Phillip Schofield – with the gig going to Rochelle Hulmes instead.

A former daytime television executive told The Sun: "Phillip actively campaigned for Rochelle Humes to get the job despite Amanda being more experienced — and having been told privately she’d got the gig."

However, a spokesperson for ITV counter-acted these claims, saying in a statement that the decision is made by the producers of a programme and not the presenters.

A statement from ITV later read: "It’s deeply disappointing and unfair for Phillip to be the target of this sort of malicious gossip.

"Phillip is a much-respected broadcaster and colleague and this is absolutely not a description of This Morning that we recognise."

Phillip Schofield later addressed the allegations on Twitter, adding: "The end of another really sad weekend.

"When you try for 35 years to be the easiest, most fun person to work with and you read such hurtful and wildly untrue stories from nameless ‘sources’.

"Obviously I’ll take it on the chin..I just hope you know me better."

However, the reported feud was brought back into the limelight in the same year, when Amanda mentioned the TV presenter in a quick-fire radio quiz.

When asked which three things she would not want to find in her house, she replied: "Spiders, flies and Phillip Schofield."

Phillip Schofield has spoken openly about tensions with Piers Morgan in the past, although the two are reported to have become friends following the reported feud.

In his 2020 autobiography, Phillip Schofield revealed that Piers Morgan had asked for memorabelia belonging to the presenter – with Philip under the impression that it was going to be used as part of a series of newspaper articles.

However, Piers had instead written an unoffocial book about Phillip Schofield instead.

The TV presenter said in his autobiography: "I was furious. Not so much that he had written the book, but that he had deceived me.

"We didn’t speak for a long time. There were awkward moments: once, the two us were in a lift for what felt like an endless descent."

However he added that the pair had since made up, adding: "I was angry, and he’d actually been flattering and kind in the biography (although utterly deceitful).

"It was time to make up. He was nervous when I walked over. “Enough,” I said, and I shook his hand. We’ve been fine ever since."

In 2019, Ruth Langsford reportedly filed a complaint about Phillip Schofield, after he cut off a segment of Loose Women during This Morning – to which Ruth furiously slammed down her pen on the table.

A source told The Sun at the time: "Ruth and Eamonn both appear to be treated harshly by Phillip.

"After Phillip literally cut her off in the middle of a sentence on air when she was hosting Loose Women she decided enough was enough. Yet again nothing changed."

Britains Got Talent judge Amanda Holden, who also had her own reported feud with Phillip Schofield in the past, praised Ruth for speaking out on her radio show, saying: "I admire anyone who sticks up for themselves as it’s not an easy thing to do."

"It's up to Ruth to say how she felt, but I was feeling hurt for her. No one would have snubbed me like that."