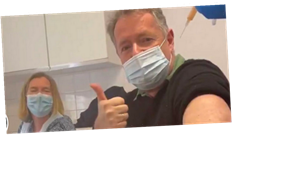 Good Morning Britain star Piers Morgan took to social media to alert his following that he had got his Covid jab.

However the 55-year-old couldn't resist landing a tongue in cheek blow about his co-star Susanna Reid – even though she wasn't present to defend herself.

Taking to Twitter, the TV star joked with his huge following that he was he was about to be vaccinated because he's "that old".

"Thanks to everyone at the Violet Melchett Centre in Chelsea for an incredibly quick, efficient service.

"In and out in 9 minutes! Had the Oxford-AstraZeneca vaccine. Here's the historic moment…"

He also shared the moment of truth, showcasing how easy it and painless it was to have the jab.

In the snippet, Piers said: "So here I am, I'm about to have my AstraZeneca jab, I'm that old."

He went on: "I have to say it's been an amazingly efficient operation, I've literally been whizzed through everyone, the line was quick.

I was told exactly where to go, they treated me like the idiot I am, nothing was left to chance."

Chatting away with the doctor who was administering the anti-virus, he told Piers that he would be injecting around 540 people in just one day.

The doctor takes to his feet and places the injection in Pier's top right bicep, before adding: "There we are done."

"Very painless, adding Piers, before landing the jibe about his sidekick, he explained: "That's it done. Not even as painful as working with Susanna Reid."

Meanwhile it's proved to be quite a rollercoaster week for the former Daily Mirror editor who had to engage the police after he'd received frightful death threats.

After the ITV host's family had been thrown into the mix, Piers decided he needed to take drastic measures, not only for his sake but for others who receive messages like that on a frequent basis.

Speaking to Holly Willoughby and Philip Schofield on This Morning, he explained: "There is a line. Overt racism, homophobia, transphobia, but to have people actually make specific death threats.

He explained: "I want them to be held accountable.

"I'm not really doing it for me, or people like me as we can afford to look after ourselves.

GMB continues on Monday at 6am on ITV.