Piers Morgan has taken a swipe at national treasure and the world’s greatest crisps salesman Gary Lineker on Twitter. So far, so standard Piers.

However, the presenter decided to inflict his online spat onto all of us by talking about it on Good Morning Britain today (June 19) – because it’s 2018 and being an argumentative man-child is just accepted for some reason.

It all began after England’s win over Tunisia in the World Cup last night, after which the BBC presenter tweeted: “Never ceases to amaze me how easy some folk think World Cup football is.

“Have you watched all the so-called big teams? It ain’t that easy, especially against tough defensive opposition. I suppose those that are so critical haven’t been there, though. Night all.”

However, the Good Morning Britain presenter decided to give his two cents on the matter, and the responses descended into a back-and-forth between the pair.

Piers eventually taunted Gary over the fact that he had never won a World Cup himself, the latter classily noting he has one more Golden Boot.

Of course, this was all going on while Piers was presenting GMB, so he decided to take the spat on air, hitting out at Gary saying “you don’t know what it’s like” to play at the highest level.

Susanna Reid then took a brilliant dig at her co-host, noting: “He’s got a point! Did I miss out on your top-level Premier League career?”

However, Piers explained that he took issue with Gary “pontificating about politicians”, despite not being one, comparing it to his attitude about football. 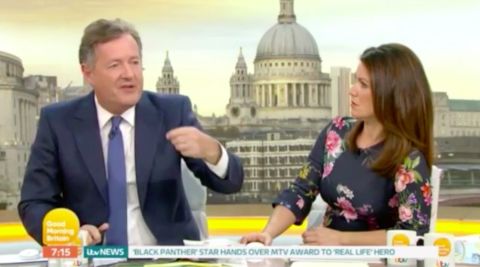 “His point is unless you’ve played it at the highest level you don’t understand the game,” he added. “Of course you do, you still watch it. I haven’t been to the sun but I know it’s hot.”

Susanna then asked: “Are you just involved in your own private Twitter war while we’re on air?” as she moved things on to the next segment.

Later on, Piers posted a clip on Twitter with former footballer and GMB guest Sir Geoff Hurst, the former England player saying Piers was “10 times better” at football than Gary.

“They think it’s all over. It is now,” Gary joked back.