After Morgan interviewed the controversial president earlier this year, he has gained the reputation of being Trump’s go-to interviewer in the UK. And he recently took to Twitter to announce their latest meeting.

Trump visited the UK on Friday (July 13) to meet with Prime Minister Theresa May and the Queen – and despite protests of around tens of thousands strong and a giant inflatable baby Trump floating over Parliament, the President insists his visit was a “success”. 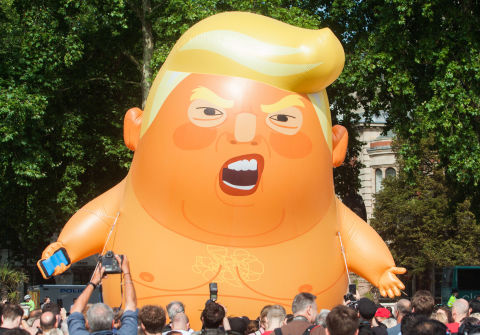 In an exclusive interview with Morgan for The Daily Mail, Trump discussed meeting the Queen for the first time: “The Queen is FANTASTIC! She’s a fantastic woman; so much energy and smart and sharp,” he said.

“She was AMAZING! Such a wonderful lady and so beautiful! It was such an honour to finally meet her. To have a Queen like that is great.”

Asked what was going through his head when he met her, Trump replied: “Well first of all, I was thinking about my mother. My mother passed away a while ago and she was a tremendous fan of the Queen.

After admitting that his mother was the Queen’s biggest fan, Trump revealed: “It was a very easy talk. You know, it’s hard to talk to somebody if you’re, sort of, if there’s not that something special.”

He also said they discussed Brexit, stating: “She said it’s a very – and she’s right – it’s a very complex problem, I think nobody had any idea how complex that was going to be… Everyone thought it was going to be. ‘Oh it’s simple, we join or don’t join, or let’s see what happens.'”

He wouldn’t reveal, however, what the Queen personally thought about Brexit, adding: “Well, I can’t talk, you know I’ve heard very strongly from a lot of people, you just don’t talk about that conversation with the Queen, right?

“You don’t wanna do that. Let me tell you what I can talk about. She is an incredible woman, she is so sharp, she is so beautiful, when I say beautiful – inside and out. That is a beautiful woman.”