As the morning rush gained momentum at a Gregorys Coffee outlet in midtown Manhattan on Wednesday, a small group of activists and organizers gathered to prepare for the day’s work. They discussed strategy, stacked flyers and assembled cardboard boxes. On each box, they taped a sign that read, “RCA Records: Drop sexual predator R. Kelly.”

Before 9 a.m., they trooped out to join a small, but enthusiastic, group of protesters — around 80 people said they planned to attend the event on Facebook — at the nearby offices of Sony Music Entertainment, parent company of Kelly’s longtime record label RCA. The boxes were for a petition bearing close to 220,000 signatures that urged RCA to drop Kelly. The protesters also planned to present RCA with a “Record Label of Shame” award.

“Culture is shifting,” said Natalie Green, spokesperson and communications manager for UltraViolet, as she faced a wall of eight to ten camera crews. “The fact that we are here proves that culture is shifting … Now the question is whether RCA wants to be left behind.” 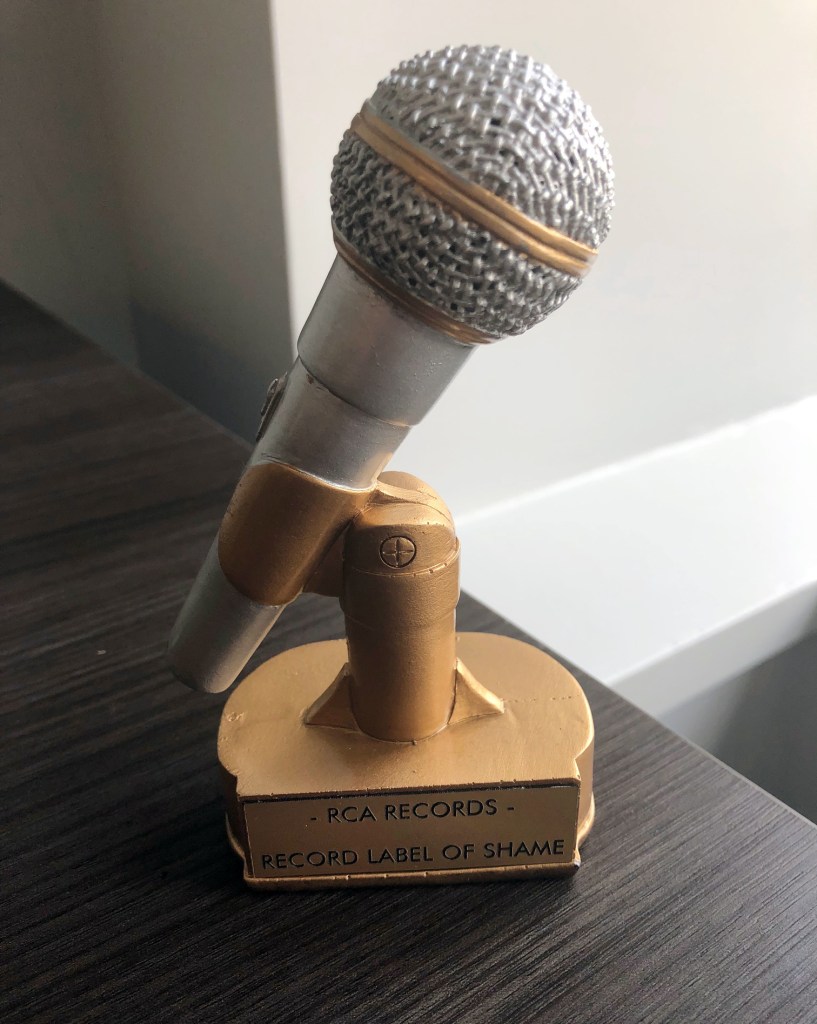 Plans for the protest came together two weeks ago in the wake of the Lifetime docuseries Surviving R. Kelly, according to Jade Magnus Ogunnaike, director of organizing for Color of Change. “After you see the six hours of [the docuseries], there’s nothing you can say but, ‘Damn, R. Kelly needs to face consequences, and everyone who enabled him needs to face consequences as well,’” Ogunnaike tells Rolling Stone. “Seeing the faces, hearing the voices of the survivors, hearing that over 50 people over the course of 25 years knew about the sexual violence that Kelly was perpetrating puts you in a different mind-frame.” (R. Kelly has repeatedly denied all charges.)

Affiliates of Girls for Gender Equity and Black Women’s Blueprint joined members of Color of Change and UltraViolet outside Sony’s offices. Protestors carried signs that read “Black Girls Matter” and “Hey RCA, Drop R. Kelly;” one woman had a poster in which RCA served as an acrostic for “Record label Complicit in Assault.”

Members of each participating organization took turns speaking to the assembled crowd, offering support to the women who allegedly suffered Kelly’s abuse and condemning both the singer and RCA for standing by him. “Without a doubt, we believe the survivors,” said Joanne Smith, founder and president of Girls for Gender Equity. Later, she added, “There’s no room to sit there feeling sorry for these young women … feel enraged that schools, families, communities and institutions like RCA and Sony are still failing them.” And Green told the crowd: “Let me be clear for all of the RCA executives who might be listening to this right now: Anything less than dropping R. Kelly makes you complicit.”

In between speeches, protestors took up a series of chants: “Mute R. Kelly!” “Hey hey, ho ho, R. Kelly has got to go!” “Sony Music has no shame, they only care about profits and fame!” “RCA take a stand, we won’t stop ’til Kelly’s banned!” After roughly half an hour, the protestors crossed the street to bring the petition boxes and the Record Label of Shame award to the lobby security detail who control access to the Sony building. “That’s the bare minimum [on the label’s part] — sending someone down to accept a couple of boxes,” explains Evan Feeney, a campaign director for Color of Change.

RCA did clear that low bar, dispatching an employee to collect the petition, according to a spokesperson for Color of Change. (Building security did not let all those present into the Sony building.) But organizers remain underwhelmed by the label’s response, which has mostly been silence. “We had initial conversations with RCA in 2017 — they kind of put us in a holding pattern and stopped responding after a while,” says Ogunnaike. “This week, we saw that RCA is [reportedly] no longer funding [Kelly’s] music videos or paying for production of his songs, but that’s not enough. We want them to sever ties with him and no longer keep a sexual predator on the payroll.”

Until that happens, protestors suggested that the door remains open for additional demonstrations. “The momentum has been built — this is not a fly-by-night moment,” says Sharaya Tindal Wiesendanger, communications campaign manager for Black Women’s Blueprint. “If it took decades [for Kelly’s behavior] be revealed, it’s gonna take decades to pull down. And if it does, we’re here for that.”