There are two weird things about the new album from Perth's trippy band of world travellers, Pond, and neither of them is the fact it's called Tasmania.

They've made a psychedelic rock record that isn't really rock; and they've made the most political album of the past year – taking in sexism, the environment, refugees and indigenous rights – that doesn't actually mention politics. 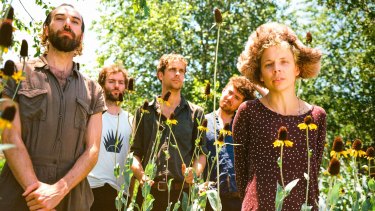 Perth band Pond have made the most political album of the past year that doesn’t actually mention politics.

"It was a natural thing because we have social and political concerns but we don't claim to be, or try to be, really knowledgeable or savvy policymakers," says Nick Allbrook, the band's principal songwriter and singer. "We're nothing but exactly what we are: just musicians who want to live the best life and believe in love and nature and stuff like that."

OK, there's a third thing: Allbrook, whose songs on this record clearly reflect that he is a thinker who can't be dismissed as merely some stoner who knows his way around a fretboard, would rather downplay his intelligence than assert his right to make informed comments.

In new tracks such as Daisy ("Nobody heard me crying in my sleep/Me and the men of the frontier stack the bodies in a heap/Jimmy grabs a beer and we wash our hands in the creek/Ooh, talk is cheap"), and Goodnight P.C.C ("Every day I wake miles away/Hoping today's my day/Living in fear same old voice in my ear/End to a real good year/Helplessly detained overstayed/Guessing I can't complain"), Allbrook makes more sense than a dozen IPA mouthpieces hogging the microphone on an ABC panel discussion.

Not for nothing does he say in Selene, "men fear power and call it sin".

"That's something I try to remind myself but I think everyone, well, most people, would agree the systems that govern our lives really thrive on making the people they control feel ignorant," Allbrook says. "And I'm a victim of that as much as anyone else."

He's less self-effacing about the way this album veers even further away from rock'n'roll, both in its rhythms and guitars.

"We love rock'n'roll, we were initiated to music from playing it, but we don't particularly want to make it or listen to it a lot anymore," Allbrook says. And when you hear songs such as Burnt Out Star, which is some crack-in-the-sky pop like the band Spiritualized, or Shame, which is almost dark R&B, the point is driven home.

"The goal of making any kind of art is you start off with an idea [which] shows you what you want to be by its faults and inadequacies, and you follow that," he says. "You follow that and change what you don't like until you do like it and can listen to it and feel proud. If I was listening to Moth Wings [the guitar heavy freakout from their 2012 album Beards, Wives, Denim] part 20 I'd feel disappointed.

"Maybe the root of that is what you're listening to, what you look at and think about, but it's really about following intuition."

Beyond intuition, is there a philosophy for this album, musically and lyrically?

"In a sense it's a tonic to great fear and desperation. It really relishes body movement and sensuality and water and nature, but it also expresses the root of those fears, which," Allbrook says, chuckling softly, "might be less of a tonic."

But then, sometimes a tonic isn't enough.