Recently Zindzi Okenyo spent a month in Melbourne, where she died 70 times. The actor and musician was playing the role of Charmian, a close confidant to Egypt's ruler in the Bell Shakespeare company production of William Shakespeare's Antony and Cleopatra. Out of devotion, the character follows the title characters in taking her life, and it left Okenyo thinking about art and commitment.

"You have to figure out how to go there, but still separate things. I've never believed you need to be tortured to make great art and I've always left the character behind when the play is over that night," Okenyo says. "It's the same with songwriting. I realised that I write my best songs when I'm melancholy, but I don't want to be that person all the time." 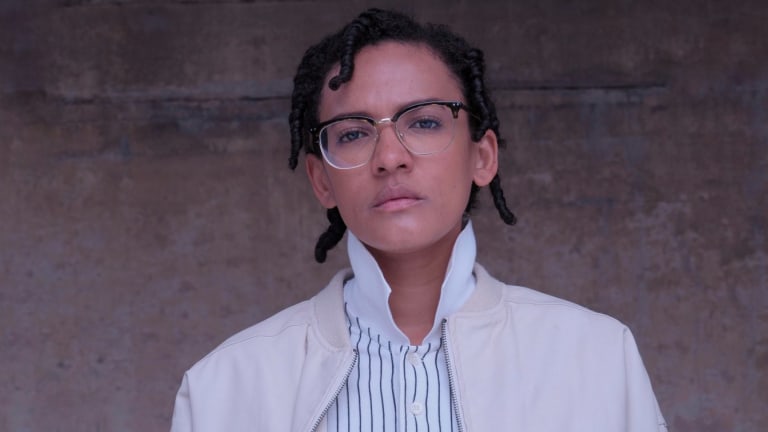 Okenyo is speaking from the English countryside, where the 32-year-old is taking in the "very green" surrounds on the final day of a brief break before flying home to Sydney. Okenyo has spent a fortnight on the couch of one of her best friends, former Sydney Theatre Company colleague Laura Scrivano, who's part of the expatriate Australian creative community in Britain. Once back here she has a national tour for her debut EP, The Wave.

"It's really exciting because my identity and my artistry are starting to work together," Okenyo says. "I always imagined that happening because it's really important to me to explain myself and express myself in different ways."

A NIDA graduate and regular Play School host, Okenyo brings the many elements of her life to bear in The Wave's six tracks. She is a queer Kenyan-Australian woman of colour who spent most of her childhood with her Australian mother, and there is both strength and vulnerability, joy and despair in the songs, which change shape as hip-hop, baroque R&B and neo-soul sounds impact the arrangements.

"My work is so personal that I learn a lot about myself, so it's healthy to give it over," Okenyo says. "I believe that as artists our job is to reflect humanity and the way I can do that is to try and be my most authentic self. I do that when I play characters, but there are all these other layers involved, but it was confronting when it came to telling my own personal stories. Songwriting is incredibly open, but I pushed myself to feel the vulnerability."

Okenyo has always laid herself bare through music. The first track she wrote and released, 2013's Broken Chest, stemmed from her own heartbreak. Since then she's been finding her way, a process that included signing to the Sydney record label Elefant Traks, which is home to Horrorshow and L-Fresh the Lion. It was Okenyo's label boss and fellow musician Tim Levinson (also known as Urthboy) who encouraged her to rap instead of singing.

"I grew up listening to hip-hop, but I always thought, 'I'm not a rapper, that's not me', but with that encouragement I'm not singing that much at all now," Okenyo says. "It's a different skill set to write with – rap verses are really different to ones that you sing, it's all about rhythm and wordplay."

"I don't want to call them demons, because it gives them too much power," Okenyo declares on the EP's opening track, Demons, and the songs have striking lines that engage with contradictions. The propulsive Come Through is about being caught between what you want from the person you love and what you need to give them.

"Coming from the acting background I'm predisposed to create some kind of story or journey as the song's background, but all the songs have different movements in them," Okenyo says. "I really like that. A song like Iso absolutely does not end where it started. I've always enjoyed music that surprises me."

Next month Okenyo will be heading south again for the Melbourne Theatre Company's production of Oscar Wilde's An Ideal Husband. Once rehearsals are bedded down and she's on stage at night, recording sessions for her next EP, with co-writer and co-producer Lionel Towers (Gypsy & the Cat), will commence. Okenyo is keen to add to her studio body of work, but she also enjoys the release of playing gigs.

"Sometimes it's funny to perform live because I'll be doing a song that at the time was really personal and important to me, but then you're performing it to people in a club and they've had a few drinks and they're taking something different like joy from it," Okenyo says. "I love that, because it's not about me at all."

Okenyo plays Waywards at the Bank Hotel, Newtown, on June 23.