On Friday May started the whole mysterious build-up with a post saying: “Social Distancing Secret Video Shoot Day – wow! Feels like being back in business!!” Since then he has posted TEN more posts mixing pictures and videos, sending fans into a frenzy. Admittedly, one was a promo video for the upcoming new Queen and Adam Lambert tour video and album. But all the others were a cheeky tease since he did not include sound with any of the videos. Until now.

What became quickly clear is that this is not related to any main band releases, although fans can still hope since all three current members of Queen have spoken of their hopes that new material is on the way.

Instead, the pictures and videos show the guitarist with a selection of women, who will be familiar faces to Brian May and Queen fans.

SCROLL DOWN TO WATCH THE VIDEO NEXT 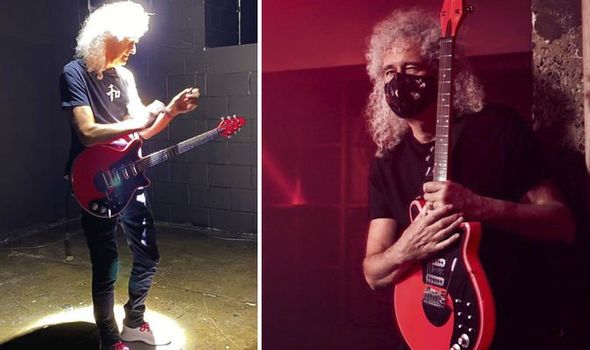 The short clip starts with an epic guitar solo before a female voice bursts in with  incredible rock-fused runs.

Any of the women featured could be singing since they are all major West End stars.

One is Brian’s long-term collaborator Kerri Ellis. The West End musicals star has recorded numerous times with the Queen guitarist over the years.

Another one is the “wonderful Mazz Murray.” This leading lady played the original Killer Queen in We Will Rock You. She has also had starring roles in Mamma Mia and Chicago.

The song itself will be a charity release for raise money for the fight against cancer. Brian even themed his new guitar to co-ordinate with the cause.

He wrote: “Bri with the world’s first “World’s Pinkest Pink” BMG guitar. Specially made by my guys for yesterday’s video shoot.

“There’s a reason for this! The track is to be released for the benefit of two great women’s Cancer Charities – and since the music is totally appropriate, I thought the guitar ought to be, too. The release will raise money and I’m also hoping to auction this guitar to raise some extra funds. See you in October.”