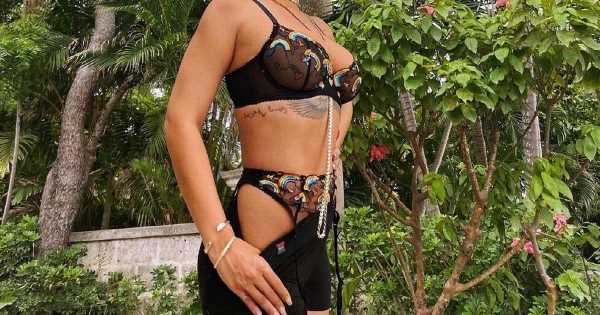 Rihanna has stolen the show yet again as she posed for an exotic Pride-themed photoshoot whilst wearing a sizzling lingerie piece.

The business beauty, 33, could be seen striking a sultry pose with a row of palm trees behind her as she sported the sensational multi-coloured lingerie which was dotted with rainbows to mark Pride month.

The red-hot lingerie – part of her amazing Savage x Fenty lingerie line – was mostly black and seriously skintight to emphasise her toned body, with a set of celebratory rainbows decorated around her bra and matching underwear.

In the first snap, Ri shoots a confident look into the distance as she playfully pulls down her skin-hugging shorts to reveal her killer thighs and saucy underwear.

Her incredible tattooed body was glowing as she stood in front of the camera for the photoshoot, and she topped off the look with a long gold necklace which hung all the way down in between her assets as well as a set of shiny gold bracelets.

In the second snap, the fashion icon placed her hands on her hips for an upwards shot which made her look like a beach beauty in among the palm trees.

To jazz up the show-stopping look even more, the smoking-hot songstress donned a pair of multi-coloured sunglasses to match the lingerie and celebrate the Pride community as she soaked up the tropical sun.

Taking to Instagram, Rihanna gave a shout out to the LGBTQ community in front of her whopping 99.6 million followers and tagged her Savage X Fenty brand, writing: "#SavageXPride….pride forever!!!" before signing off with a rainbow-emoji.

Rihanna's social media followers were absolutely blown away by the lingerie shoot and many flocked to fill the comments section with compliments.

Many simply filled the comments section with fire-emojis to express how hot Rhi Rhi is, but one adoring follower wrote: "The way you just heat up my phone."

A second fan commented: "YES QUEEN," and signed off with a love-heart emoji.

A fourth then joined in and clearly appreciated the Pride rainbows, saying: "Rainbow kisses xo love u," and branded her a "baddie" which is a slang term for beautiful.

Barbados-born Rihanna launched Fenty in May 2019 under the luxury fashion group LVMH (Moët Hennessy Louis Vuitton), and was the first woman and of colour to achieve this.

She previously launched her critically acclaimed cosmetics company Fenty Beauty in 2017 – with a $10 million dollar partnership with LVMH's Kendo Brands.

She is currently dating US rapper A$AP Rocky, and it seems their relationship is going well as he opened up about his feelings for her in an interview with GQ.

"So much better when you got the One."

"She amounts to probably, like, a million of the other ones. I think when you know, you know," as he added: "She's the One."