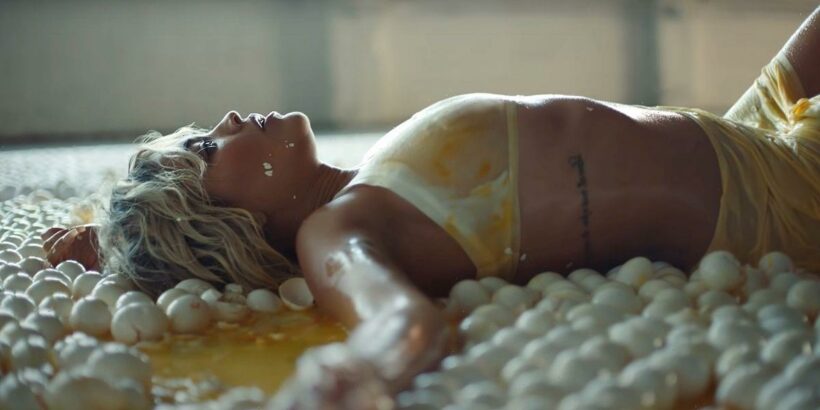 Rita Ora is currently lighting up screens on The Masked Singer as she tries to work out the identities of the celebrities behind the elaborate disguises.

The 32-year-old rose to prominence after appearing on DJ Fresh's single, Hot Right Now, which reached number one in the UK when it was released in 2012.

And since the release of the hit single, the singer has delighted fans with some seriously sexy moments in her own music videos.

READ MORE: Rita Ora forces fans to do a double take with striking throwback snap of her mum

As Rita continues to grace screens on The Masked Singer, Daily Star has taken a look at some of her hottest music video moments, from a raunchy kiss with Cardi B to dancing in lingerie.

The same year Hot Right Now was released, Rita released her debut studio album, Ora, which featured the single, How We Do (Party).

In the eye-popping video, the blonde beauty slipped into a tiny leotard, parading her endless legs and slender figure.

Above her plunging one piece, Rita donned a cropped jacket which boasted fur across the front and a USA flag print on the sleeves.

Sizzling in the sultry video, Rita wore her statement tresses in tight curls and opted for a glam palette of makeup to accentuate her beautiful features.

In the video for Poison, released in 2015, Rita put on an extremely raunchy display as she got up close and personal with her male co-star.

Wearing nothing but a coat draped over her shoulders, Rita's on screen love interest ran his hands over her neck before planting a kiss on her bare skin.

He then cupped her neck with his hand and pulled her head back, kissing her on the neck and cheek before an onlooker catches them.

With her platinum locks styled in a pixie cut, Rita looked simply stunning as she sported bold red lipstick and dramatic winged eyeliner.

Starring alongside Iggy Azalea in Black Widow, the two singer's ramped up the heat as they poured their killer curves into skintight bodysuits.

Sitting down for a game of poker with three men, the British songstress commanded attention in the black and red lycra one piece.

As she stood from the table and threw her cards down, Rita's chest was exposed via the daring neckline which plunged to her midriff.

The beauty looked incredibly sexy in a poker straight wig, ditching her statement look in favour of a layered fringe.

Rita put on a red-hot display when she starred alongside Chris Brown in their racy R&B collaboration, Body On Me.

According to Hollywood life, the singer revealed she "loves her sexual chemistry" with the 33-year-old singer – and it certainly translated on screen.

The pair got extremely close and intimate for the cameras, while Rita took things one step further as she ditched her clothes for a seductive dance.

With nothing but a Union Jack flag covering her, the Your Song hitmaker put on a sultry display as she ran her hands down her skin, singing: "I just want to feel your body on me".

Not only did Rita get up close and personal with Chris Brown, but she also put on an eye-popping display when she locked lips with rapper Cardi B.

The two stars, along with Bebe Rexha and Charli XCX, appeared in the music video for the 2018 track Girls, and things got especially steamy.

First kissing Rita's neck, the Bodak Yellow singer then worked her way up and planted a passionate kiss on her co-star's lips.

Rita certainly didn't disappoint when it came to the music video for her 2021 single, Bang, parading her incredible figure wearing black lace lingerie and suspenders.

Dancing in a purple lit mirrored room, the For You songstress made sure all eyes were on her as she danced around in the bustier complete with a matching thong and stockings.

She sported eccentric blue eye shadow and ditched her trademark locks, slicking them back in a wet style look.

In the sultry video for How To Be Lonely, Rita put on an extremely racy display as she writhed around on the floor in a skimpy outfit.

The singer sported a white dress which boasted a huge cut-out across her midriff and slashed at her thighs, exposing her toned abs and lithe legs.

Her barely-there ensemble clung to her skin as she threw herself on the floor surrounded by eggs, crushing them on her gym-honed body.