Legendary actor Robert De Niro had to utter just two words on stage at the Tony Awards to receive a standing ovation.

The 74-year-old actor arrived on stage at the annual theatre awards in New York to introduce Bruce Springsteen. But before this, he thought he’d get one thing out the way.

The creme de la creme of the theatre world were then seen grinning, whooping and applauding De Niro before rising to their feet to further show their support.

The expletive was unsurprisingly bleeped out by US TV, although viewers on Twitter were able to check out some uncensored versions.

As of yet, the President has not responded, although he is scheduled for a historic meeting with North Korean leader Kim Jong-un this week so hopefully that takes preference. However, given previous examples, we’re sure if Trump can find the time – in between the crucial talks – De Niro can expect a furious and rambling tweet coming his way. 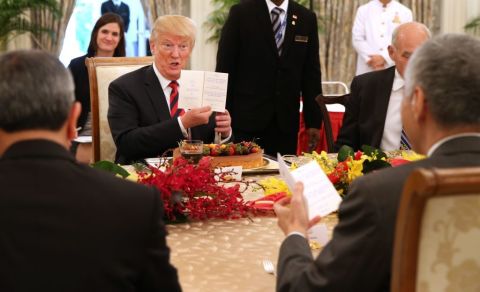 This is not the first time the Taxi Driver actor has issued an enraged takedown of the 45th President. Ahead of the election in 2016, De Niro appeared in a video where he was supposed to remain impartial and urge the American youth to vote. Instead, he delivered an almighty put-down to Trump littered with insults before adding that he wanted to punch him in the face.

After the shock election result, the actor later conceded on late night television that given Trump’s job change he probably wouldn’t be attempting to land any punches.