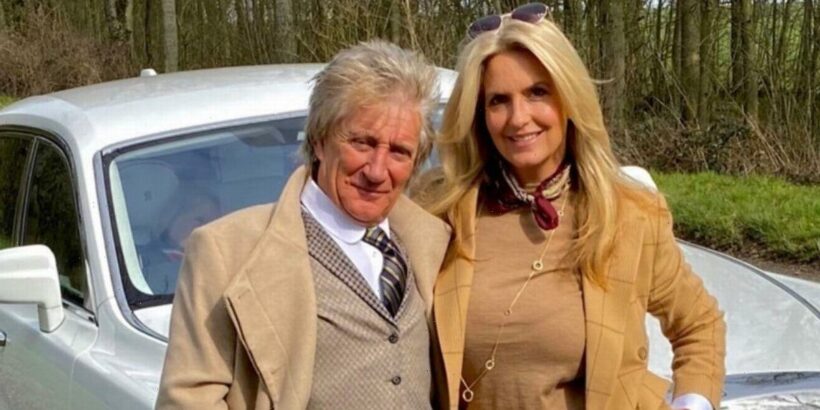 Rod Stewart and his model wife Penny Lancaster were dressed to the nines for a visit to Cheltenham Festival on Tuesday (March 15).

The Sailing hitmaker looked comfortable as anything in his three-piece suit as he posed with his arm around Penny as they posed alongside a white Rolls Royce on the way to the races.

Rod showed off his signature sense of style in a pale brown waistcoat and a pair of beige chinos, tucking a woollen camel coat around his shoulders as he posed with his free hand in his pocket.

Rod added a brown striped tie to his ensemble, buttoning his crisp white shirt up to the collar and matching the luxury ensemble with a pair of tartan and leather shoes.

The Loose Women star added a braided leather belt and knee-high brown riding boots to complete the look, with a burgundy and beige neckerchief tied loosely around her collar to add another flair of horse riding chic.

Penny opted to accessorise with a loose gold hoop necklace and a pair of sunglasses perched atop her head as she beamed at the camera alongside Rod.

Later, the pair were pictured amongst a crowd of revellers as Rod leaned close to Penny with his lips puckered – and appeared to be pressing a kiss to her breast.

And the star couldn’t resist cheekily cocking one leg on top of a railing when they arrived in the stands, leaving the waiting public incredibly amused as he pulled a face for the waiting cameras.

Rod’s swanky look was a far cry from the outfit he donned to get down and dirty at the weekend, as he was forced to fill potholes near his Essex home.

The Maggie May singer explained that his Ferrari couldn’t get through the bumpy road any longer as he led a singalong for the working crew, armed with a shovel and high-vis jacket and definitely not shying away from the work himself.

Rod wore a dark tracksuit accentuated with turquoise and a bright pair of mint green trainers as he stood in the muddy road to repair the road, explaining: “I’m repairing the street where I live, because nobody can be bothered to do it.

"This is the state of the road near where I live in Harlow and it’s been like this for ages.

"People are smashing their cars up. The other day, there was an ambulance with a burst tyre. My Ferrari can’t go through here at all!"

He added: “We are filling the holes while millions and millions of pounds have been spent on the M11 over there.”