UPDATE: ABC has acted swiftly to cancel the Roseanne revival, in spite of its high ratings, following a backlash to a racist ‘joke’ that star Roseanne Barr tweeted about former Obama administration official Valerie Jarrett.

ABC president Channing Dungey said Tuesday (May 29): “Roseanne’s Twitter statement is abhorrent, repugnant and inconsistent with our values, and we have decided to cancel her show.”

Disney CEO Bob Iger, who oversees ABC, concurred in his own statement: “There was only one thing to do here, and that was the right thing.” 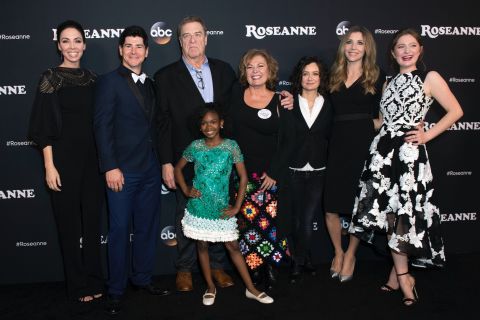 Barr has also been dropped by her representatives at the powerful Hollywood agency ICM, who wrote to employees today: “We are all greatly distressed by the disgraceful and unacceptable tweet from Roseanne Barr this morning.

“What she wrote is antithetical to our core values, both as individuals and as an agency. Consequently, we have notified her that we will not represent her. Effective immediately, Roseanne Barr is no longer a client.”

Shortly before the announcement was made, Barr had been condemned by co-star Sara Gilbert, who stressed that Barr’s comments were not representative of the Roseanne cast and crew.

“Roseanne’s recent comments about Valerie Jarrett, and so much more, are abhorrent and do not reflect the beliefs of our cast and crew or anyone associated with our show. I am disappointed in her actions to say the least,” Gilbert tweeted.

“This is incredibly sad and difficult for all of us, as we’ve created a show that we believe in, are proud of, and that audiences love – one that is separate and apart from the opinions and words of one cast member.”

ORIGINAL: Roseanne Barr has claimed that she is ‘quitting’ Twitter after a post she made was widely condemned as being racist.

The TV actress drew huge backlash after deciding to have a go at Valerie Jarrett, one of Barack Obama’s senior advisers, comparing her to an ape.

“muslim brotherhood & planet of the apes had a baby=vj,” she wrote.

Roseanne apologised for the ‘joke’, and announced her intention to take some time away from the social media platform (although it’s not the first time she has threatened to quit Twitter).

“I apologize. I am now leaving Twitter,” she wrote.

“I apologize to Valerie Jarrett and to all Americans. I am truly sorry for making a bad joke about her politics and her looks. I should have known better. Forgive me-my joke was in bad taste.”

Wanda Sykes, who worked on the revival season, has also confirmed that she won’t be back for Roseanne’s next season.

Roseanne currently stars in her own ABC sitcom, which recently got picked up for an 11th season.

The latest season has not been without controversy, though. One episode featured a joke which many thought mocked Black-ish and Fresh Off the Boat, which centre around an African-American and an Asian-American family respectively.

ABC boss Channing Dungey defended the joke, arguing that the writers were “tipping their hat to those shows”.