"The music industry is totally f—ed. You can write that," spits Cosima Jaala with a gleeful laugh.

The leader of her eponymous Melbourne outfit, Jaala is full of mischief, both in song and on stage. After years fronting bonkers big band Mangelwurzel ("that was pretty over-the-top, ridiculous"), Jaala founded her own project when she found herself writing songs that "were definitely less silly, coming from a more private place". 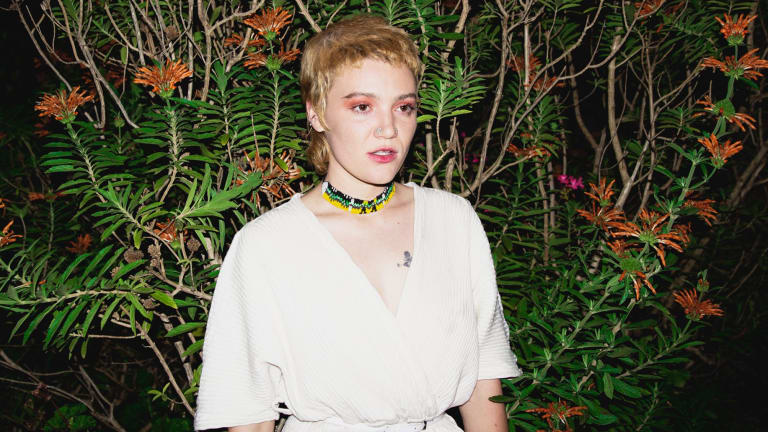 Jaala says she was a ‘pretty turbs’ kid.

Yet Jaala shows have found her offending music-biz attendees at Bigsound ("this guy from NPR came up to me and said, 'I really didn't like what you did up there on stage'"), inviting a stage invasion while supporting Julia Jacklin, and offering audiences absurdist banter. All this while making beautiful, bewildering music that's at once sweet and salty, punk and proggy.

Jaala grew up in suburban Brisbane, where she was, she says, a "pretty turbs" kid with "too much energy". She moved to Melbourne to study Fine Arts at RMIT, first picked up a banjo ("it spoke to me, it kind of sounds like my voice. Like, nyaahh"), then cut her teeth playing in punk bands.

When she started performing under her own name, Jaala found it hard, and she grew more, rather than less, anxious over time.

"I was really nervous," she offers. "I would think [about] how I could get out of [a show]. Like, maybe I could walk in front of a car and break my arm or something. Ridiculous thoughts like that. Shaking, forgetting things, feeling like a total impostor, wondering how you got the gig because you suck."

A year ago, Nick Allbrook of Pond talked to Jaala about taking beta-blockers. The medication made a difference. "It helps me get over a lot of shit, I don't feel scared," she says.

This new confidence has coincided with a fresh Jaala LP and line-up. Joonya Spirit is her follow-up to 2015's Hard Hold, a debut that was met with plentiful buzz that never quite materialised into momentum. "We never made it overseas, we just never had the money, so that just died in the ass," Jaala says.

Joonya Spirit "sat on the shelf" for almost a year before finding a release on the great local label Bedroom Suck. During that downtime, Jaala often felt dismayed, but remained resolute.

"It is hard, you have to sacrifice a lot," she says. "But, when I was younger, music was the only thing that got me through. So, I wanna contribute to that. It's not some great ego trip, like, 'I wanna be famous!' It's definitely not about that."

Jaala plays The Tote in Melbourne on Friday 29 June, and Waywards in Sydney on Friday 6 July.