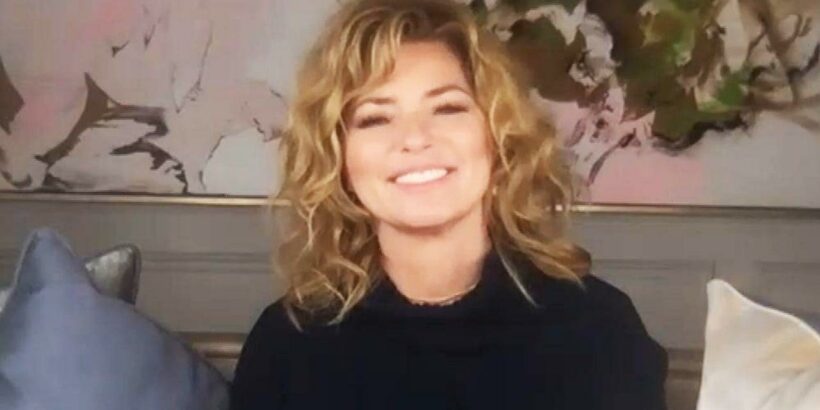 Shania Twain has some big plans for a future collaboration. The country music icon, who recently shared some sweet words for Blake Shelton and Gwen Stefani, is opening up about her love for the musical couple.

Twain spoke with ET’s Lauren Zima on Monday, and she reflected on the kind sentiments she had for the pair regarding their upcoming wedding, during an episode of her podcast, Home Now Radio, earlier this week.

“Well my goal is to do a trio with them,” Twain told ET. “So, when I think of Blake and Gwen, I think trio vocals. So that’s the first thing I wanna do.”

During her podcast, Twain had a message for the couple, sharing, “When you set your wedding date, let me know. Even if I’m not invited, I’ll be thinking of you. I’ll be sending good thoughts your way.”

The songstress explained to ET that she has no idea if she’d be invited, but she has given some thought to a wedding present she’d want to send them.

“I’d have to send something very, very crossover,” she shared. “Because, like, she’s glam and he’s plaid and jeans.”

Meanwhile, Twain is also gearing up for her return to her Las Vegas residency at Planet Hollywood, which had shut down last year due to the COVID-19 pandemic. After a long hiatus, Twain said she’s really excited to be getting back to business.

“I have not seem my dancers, my crew, the band, and I haven’t seen the fans. So it’s time to reunite. Time to party,” she said. “I put so much work into the show, from designing, to building the concept and the wardrobe to bringing a show together that I think my fans will love. And then all of a sudden it’s just stopped,” she reflected. “So I was looking forward to getting back into the environment, back on the stage, you know watching it all up and running again.”

“Most of all I have to say [I miss] just hugging, hugging the fans,” she added. “I hope that we’re allowed to hug by then.”

Twain is set to head back to Las Vegas in December, and she’s already coming up with festive ideas to celebrate her return in the spirit of the season.

“It’s gonna be the holiday spirit, and I’m gonna take advantage of that,” she explained.

Twain also shared some words of wisdom with other artists who will be kicking off their own residencies in Sin City in the coming months — including Usher and Katy Perry, among others.

“My suggestion would be to stay there between shows, because there’s so much to do,” she said. “The food is great, the other shows are great, I mean if you stay in town between your own shows, you get to see all the other shows, and I’ve met more artists during my residencies in Vegas than anywhere else!”

Apart from performing, Twain is also excited to take in other artists’ acts — especially Celine Dion, who Twain said is “definitely one of the first shows that I see when I get back. I love her!”

She’s also excited to catch Usher’s upcoming residency, explaining, “I think he’s just adorable and he’s a great singer, and, you know, I love him, I love his music. So I will be out seeing his show for sure!”