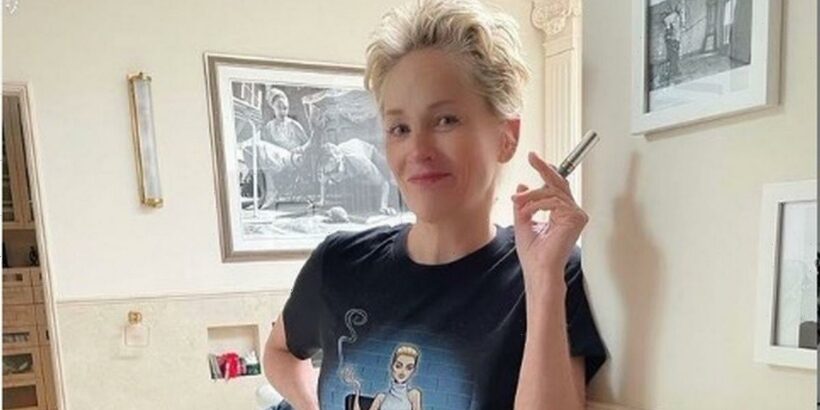 Sharon Stone, 63, flashed her long legs in a stunning new snap as the Basic Instinct star looked younger than ever in her loose-fitting black T-shirt.

Sharon's T-Shirt showed a cartoon of herself holding a lit cigar in her glamorous halter-neck gown on the set of Basic Instinct.

Wearing her short, blond hair pushed back off of her face, the mother-of-three gave the camera a small smirk as she posed.

Recreating the picture, Sharon posed with a replacement cigar having given up smoking in 2001 after a brain aneurysm.

After being treated for a stroke and a subarachnoid hemorrhage that bled into her brain, head and spine, Sharon has since cut out most tobacco and alcohol.

Sharon previously admitted to being nostalgic about cigars, "Oh, I used to like them now and again in the right environment. I love it when you're in a tropical setting. The more jungle tropic it is, the better."

Feeling nostalgic again, Sharon captured her latest upload, "Been there, done that; got the T-Shirt."

Always oozing confidence, the star placed one hand on her hip as she posed in front of a chair draped with an old shirt and other clothes.

She stood next to a number of framed black and white photographs as she opted for a casual pose, leaning against the wall. Beginning to stray away from a career in film, the star recently published her memoir, The Beauty of Living Twice.

Lisa Rinna, the former Days of Our Lives star and cast member on The Real Housewives of Beverly Hills commented "Fabulous" in capital letters.

The casual post gained over 100,000 likes, almost as many as her recent bikini picture.

Sharon frequently uses Instagram. She often uploads videos she finds funny onto her Instagram Story and has even started making TikToks.