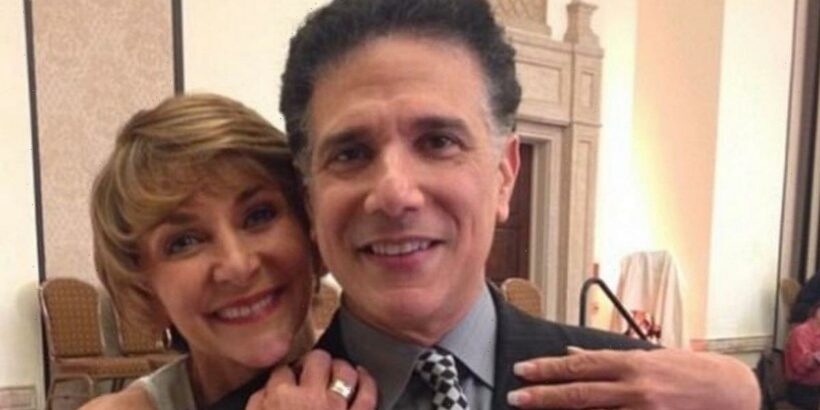 Shirley Ballas is best known for starring on Strictly Come Dancing since 2017.

The 62-year-old has been married twice, first tying the knot with ballroom dancer Sammy Stopford, who she fell for when she was 17, in 1980.

However, her marriage to Sammy came to an end four years later after she met Corky Ballas at a dance competition in Canada.

Corky, 61, caught his ex-wife's attention when he approached her during training and made a racy comment.

Shirley previously said: “One day before training I came in an hour early to warm up. I was doing push-ups. I’ll never forget, he came over and whispered in my ear, ‘Would you like me to get underneath you?’"

The couple, who share a son Mark, separated in 2007 after a turbulent 22 years of marriage.

During their volatile marriage, Shirley claimed that her ex-husband used to fat shame her on a regular basis, alleging he had "a thing about weight" and would make comments if he believed she had eaten too much.

As a result, the professional dancer said she has had a "difficult" relationship with food and is now "conscious" of what she eats.

Speaking to Radio Times, she said: "I’ve got a difficult relationship with food, one million percent. My ex-husband had a thing about weight, as he was in such beautiful shape himself.

"He would just sit and stare at me if he felt that I’d eaten a portion size that was too big. That was always difficult, so I wouldn’t say that my relationship with food was the best."

Shirley, who boasts a 40-year career as a Latin dancer, went on to say: "But it can go one of two ways: you can use food as a comfort, or you can become really conscious about what you eat – and I’d say the latter is me."

The star admitted that despite her ongoing issues, her now-partner Daniel Taylor loves "every bit" of her and life is easier now that she is with him.

She explained: "Those habits die hard. I’m not going to lie, those issues are ongoing – but Danny is probably the first person who has liked every bit of me, whether I’m a few pounds lighter or a few pounds heavier.

"He doesn’t see all that. Life with him is the easiest it’s ever been with any man."

Corky has never publicly commented on the claims.

The alleged fat shaming continued when Shirley was pregnant as she claimed Corky made comments about her weight while she was carrying their son Mark.

Shirley alleged that Corky would say: "Get too big and I’m out the door. I don’t do fat, Shirley."

During an appearance on the BBC Two documentary Womanhood, Shirley opened up about the time the Latin dancer allegedly hid a cockroach in a doughnut to stop her from getting "too heavy."

"One of the moments when I was pregnant with my son, you know, I had dieted all my life, and then I had this fetish for doughnuts and milk," she explained.

The Strictly star went on to claim: "My husband at the time thought I was too heavy for being three months pregnant. So, he put a roach underneath my doughnut. So, when I ate my chocolate doughnut the roach was underneath the icing.

"When I ate my next doughnut, the cockroach crackled in my mouth with the legs dangling on the outside.

"This made me vomit straight away. No doubt he thought this ‘creative’ solution was to ‘save me from myself’ and that I would ultimately thank him, but for anybody to want to do this to a pregnant woman is hard to believe."

The horrific experience meant Shirley hasn't eaten a doughnut since that day.

Corky has never publicly commented on the claims.

In 2017, Corky spoke to The Sun and claimed Shirley cheated on him with "at least 10 different men" throughout their marriage.

The retired ballroom dancer claimed she cheated on him as revenge after she discovered he had an affair.

He told the publication: "She was seeing whoever, whenever. Over 20 years I’d say there were at least ten men who I thought she was involved with."

The dad-of-one accused Shirley of playing tit for tat with him because of his infidelity, which he admitted was the cause of the breakdown of their marriage.

Although he claimed to only know two of Shirley's lovers for certain, the Texan star said he thought there were more.

He told the publication: "There were two that I knew of, but there may have been more that I didn’t. It was always the same thing. She would go off and teach with them first.

He added: “It was her way of getting back at me, her tit-for-tat. I shouldn’t have cheated, but I ended the affair and I was determined to make the marriage work."

Shirley said being cheated on felt like "karma", adding: "There are two sides to every story.

"It’s not about him, because we have a beautiful son together and I forgive him for anything that’s written about me."

It seemed Shirley wasn't the only one Corky made comments to as she also claimed that he branded her mother a "termite".

In her autobiography Behind The Sequins, the head judge explained that she hasn't spoken to her ex since he publicly accused her of cheating on him with several people during their marriage and called her mum a termite.

She wrote: "He said, I enjoyed dancing with her but I hated her as a person. And he called my mother a termite – the woman who’d given up 21 years of her life to raise our child so we could travel and become these dance icons.”

Corky has never responded to the claims.

The Strictly star appeared on Loose Women in 2021 where she claimed Corky told her that she wasn't "entitled" to keep his surname after they got divorced.

Beginning the conversation, panellist Janet Street-Porter asked whether she had done the same as her and kept her husband's surname.

"And when Corky and I got a divorce, he was actually the compere at an event I was adjudicating at and he refused to, point blank, to say Shirley Ballas."

With a grin on her face, Shirley added: "He said it was not my name, I was not entitled to it but I had been married for 22 years and my son is Mark Ballas and I’ll be damned if I’m changing it!

"And even if I were to get married again, it would be Shirley Ballas whatever," she laughed.