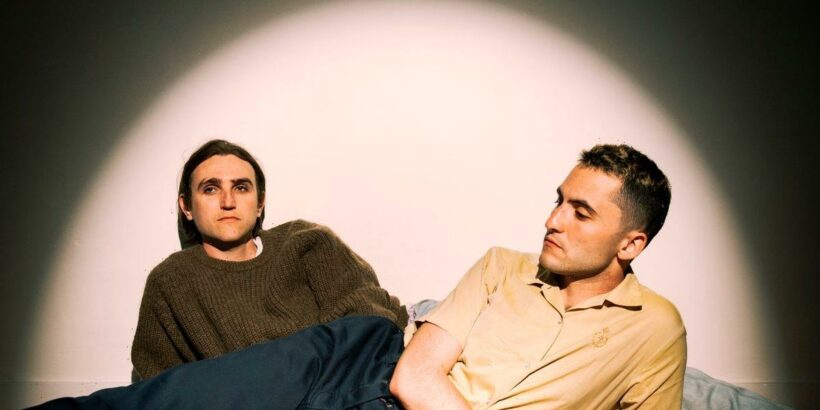 If there’s one act capable of adding some much needed sparkle to our lives right now, it’s multi-faceted Brighton duo Spang Sisters.

The team of Rachid and Jules draw upon their wide influences – from folk and soul to Motown – for a nostalgia-driven, dream-like sound with a groove-laden, modern twist.

Their self-titled nine-track debut, out now via their own Bathtime Sounds label, is a journey through the classic and contemporary as their catchy pop hooks are masterfully entwined with with observational storytelling – such as the ode to the editor of the New York Times Crossword in Thank You, Will Shortz, tackling loneliness and isolation in The Ballad of Joyce Vincent, or celebrating American food bloggers in Gary’s Rich Life.

Classic records by The Velvet Underground and Dr Dre – his smash hit 2001 in particular – inspired the album’s creative process, further highlighting Rachid and Jules’ openness to explore their sound and push boundaries sonically.

“This was the first time we were able to take our time and do it at home, and properly collaborate as well”, Rachid told Daily Star.

Spang Sisters started out as a collective in 2016 as they cut their teeth in the Bristol scene before evolving into the two-piece it is today.

Now they’re ready to take their eclectic output to the next level with one of 2021’s most unique listens.

Daily Star’s Rory McKeown caught up with Rachid and Jules to talk about the album’s creative process, its influences, the song’s themes, and their evolution.

Hi guys, how can you sum up the past 12 months?

Rachid: “It was not always easy. It gave us the opportunity to record which was wonderful at first. But of course you go through stages when the isolation becomes a bit stifling.

"We’re at a stage now where the melodies are coming very naturally but it’s very hard the lyricise. I tend to base lyrics on personal experience and people I meet. There’s really none of that at the moment.”

Where have you been spending it?

Rachid: “In Brighton. Just by the beach in Kemptown. We live across the road from one another. It’s been perfect, really.”

How long has the debut album been in the works?

Rachid: “The oldest song on the album is about six years old. That’s Jenny. The album itself we started recording about a year ago. I spent the beginning of lockdown in London and came down to buy a massive mixer.

“It was going to come out in October and then it got picked up by someone who’s now our manager essentially. He convinced us to take a more industry approach, so we’ve been doing one single every six weeks. It’s worked out well. It’s getting pressed onto vinyl and what not. That’s exciting. I’ve never had a vinyl record before.”

Was it a goal to get something on vinyl?

Rachid: “Kind of. Like a childish goal. Obviously that’s not the be all and end all. As someone who’s been buying vinyl for a long time I always thought when I have my own that’ll be the day.”

Sonically, it’s sprawling and eclectic. It’s awash with woozy guitars and there’s elements of psych, groovy r&b and folk pop, soul, blues, and even Motown for a real dream-like sound. What were you consuming for inspiration when writing and recording the album? Is this the quintessential Spang Sisters sound?

Rachid: “I would say so. That’s why we called it a self-titled album. This was the first time we were able to take our time and do it at home, and properly collaborate as well.

“In terms of consumption, because we were writing the songs over so many years, obviously it changed. If we could break it down song by song, I guess the general area would be 70s soft rock and, as you say, Motown.

“In terms of the skits we were trying to emulate the kind of thing you’d hear on a hip-hop album. Like Dr Dre.”

What was the reasoning behind the skits?

Jules: “We’d been recording for a week or two straight. We didn’t have any energy one day and were in a sort of doldrums. On a whim, we decided to have a bit of fun and the idea to have the skits blossomed from there.

“We were basically procrastinating! So we started messing around and that was it. I’m glad we did it. It was basically taking a break from the music.”

Rachid: “It was the best day.”

Jules: “Rachid was just pacing around in the corner of the room, saying ‘it’s going to be great!’.”

Most of the song titles/songs on the album are characterised with titles like Eddie Murphy, Numu Nashu, The Ballad of Joyce Vincent, Gary’s Rich Life, Thank You Will Shortz. What was the inspiration for the songs? Who are these characters?

Rachid: “It so happened that we wrote every song is about someone. Some are more jolly than others. Joyce Vincent is a sad song actually, about a woman who died and her body was left unfound for two and a half years.

“There’s an upcoming single about the editor of the New York Times crossword.”

Jules: “I don’t know how it happened really but we looked back and we realised the songs were named after people. It just happened that way.

“Gary’s Rich Life is about these two American food bloggers. I don’t know how we got wind of them, they’re not exactly famous.”

Rachid: “We’re part of this food Facebook group where middle American Republicans share what they’ve had for lunch and dinner. Gary and Rich are two people on that. We actually sent the demo to them and they were very underwhelmed.”

Jules: “We thought they’d use it as a jingle. They have a Facebook show called Gary’s Rich Life. Like Rachid says, the response was underwhelming.”

They’re going to be kicking themselves.

Rachid: “Oh yes. I really hope the New York Times’ crossword editor is excited about our song for him.”

You’ll know you’ve made it when you make it in his crossword.

Rachid: “That would be awesome!

“In answer to your question, all these people are conduits for describing a certain type of emotion. Often it tends to be loneliness. Like Joyce Vincent and Thank You Will Shortz.”

Jules: “Those songs have stronger themes than Eddie Murphy. Eddie Murphy was a complete throwaway title. There’s no link to the content of the song and the name of it.”

Also the video for Eddie Murphy was selected for screening at London’s short film festival in January. Are music videos a big part of your output?

Rachid: “Yeah it was screened. It got third place, I believe. The people who made it, their last video got the first place. It was such a great video and that’s why I wanted to go with them.”

“We’re lucky to have people around us who are so good with all that stuff. We currently have a couple of guys who do most of our visual stuff. It’s really through no effort of our own, people come to us.

“The music is cinematic or lends itself well to a video.”

Tell me more about your label Bathtime Sounds.

Rachid: “Bathtime was a DJ night in Bristol and essentially Spang Sisters became the house band. This was when we were starting out. I got a radio show in Bristol. That was kind of by fluke. I was covering a friend’s show and the radio asked me if I wanted to have my own slot.

"The original ethos was Americana music or at least inspired by Americana. Now it’s becoming a label. This is the first release but the idea was always to have a Bathtime collective.

“It began when Spang Sisters began. We started in 2016 We weren’t really getting any gigs. I thought we might as well just put a gig on. We did it at this incredible pub called the Surrey Vaults in Bristol. It was in St Paul’s. It was run by skaters and had a really good vibe.

“The first ever Bathtime show was on Valentine’s Day 2017.”

How can you describe the evolution of Spang Sisters over the past five years?

“It wasn’t explicitly our band. It was a collective project. It was pulling in all these different directions. It was always undefined what the dynamic of the band was going to be. Now that’s all gone and now it’s just me and Rachid. It feels a lot more focused now. We don’t have to put the meat through the mincer any more. It feels more streamlined.

“We’re at the beginning of the new chapter of this new formulation, of a duo surrounding themselves with musicians. We’re like Steely Dan now, except as it turns out with pretty much the same musicians as before (laughs).”

Rachid: “Now the sound is more considered and matured.”

Jules: “And we know the value of practise.”

Did you have a vision of how you wanted your debut album to be?

Jules: “You can have an arched concept and vision of how you want it to be, but ultimately it’s just what comes out. This is what came out. It’s only retroactively that we can look at it and go ‘yeah, that’s what we wanted to achieve’. It’s got all the hallmarks of all the music that I love. In that sense, yes, it went according to plan.”

Rachid: “I’d say in terms of production and arrangement it really went as well as we could have hoped, especially considering our set up. We did it all at home.”

Jules: “It’s hard to say because we recorded it last year and that was our headspace last year. Now I wouldn’t say it represents what we want to do at the minute because we’re obviously writing different stuff with different arrangements. At a certain point in time it probably was our vision but not any more.”

What is next for Spang Sisters? Are you looking forward to getting back on the road?

Jules: “Oh yeah. Especially now we have a new band. We want to show everyone that. New songs as well. I guess I look forward to our more mature output. More sophisticated arrangements, nicer production, a bit more trombone. More cello.”

Rachid: “We have so much more music. When we first heard the album would be coming out in May it was scary. We’d have to hold back on anything until quite a bit after then. Now it’s around the corner, the prospect of releasing new music is very good.

“You grow up thinking when an artist puts out an album, they’re putting out their current representation of themselves. It’s slowly becoming apparent to us that the way the industry works, you paint a painting and throw a blanket over it for a year.

“Hopefully we’ll get to a point where we can release as it’s made, more or less.”

Jules: “We’re working to get more in-sync with our output. This, in a lot of ways, has been a clearing out of the back catalogue. This is a clean slate.”

Spang Sisters’ debut album is out now via Bathtime Sounds