The ethereal voice! The haunting lyrics! The red dress! It's 40 years since Kate Bush's blustery, bewitching single Wuthering Heights soared to the No. 1 spot on the singles charts in Australia and the UK and its rapturously reviewed album, The Kick Inside, propelled a 19-year-old daughter of a doctor from Kent to eternal pop music fame. At a time when Michael Jackson and ABBA were opting for blinged-up studio productions for their music videos, Bush chose an English moor, a simple red dress and some quirky, sensual moves. 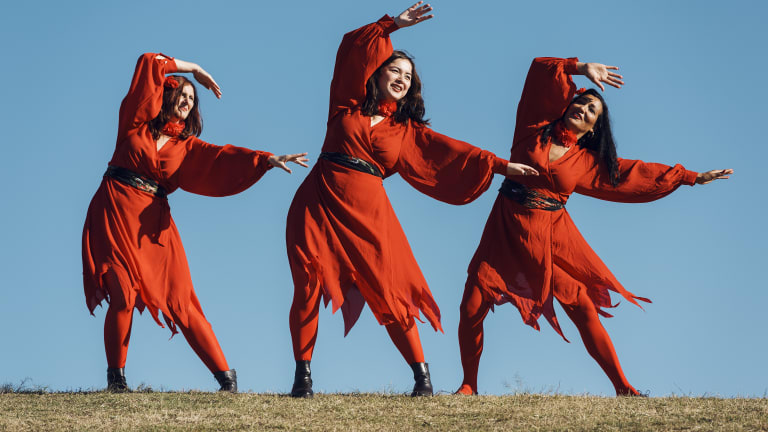 The improbable mega-success of a pop song based on Emily Brontë's highbrow literary classic – and the fact it was the first UK No. 1 hit written and performed by a woman – made Bush a rarity in the pop firmament. Since then, after 10 studio albums and a sold-out concert run in 2014 (her first since 1979), Bush, like ABBA, has always held cross-generational appeal. Which helps explain the popularity of a community dance event in Sydney and Melbourne next month, in which Bush fans will dress in red and fly through the trademark moves of the Wuthering Heights video. The Sydney organisers of the July 14 event, Belinda Burton and her 21-year-old daughter Tenzin, say that participating in The Most Wuthering Heights Day Ever doesn't require dance experience, only a "joyful attitude".

As music-obsessed pre-teen in 1978, Belinda says she was mesmerised by Bush when she first saw her on ABC's Countdown. "I'd never seen anything like it – and frankly, haven't since," she says. Interjects Tenzin, "I first heard this ethereal, high-pitched song on Mum's laptop."

Since 2016, when the first Wuthering Heights re-enactment was held, up to 500 people have attended each event in Melbourne and Sydney. This year, more than 20 events are being staged worldwide, including 10 in Australia, to mark not just the 40th anniversary of Wuthering Heights and The Kick Inside, but Bush's 60th birthday on July 30.

The question is, why this need to "wuther"? "I love being kooky," says Michelle Kitzler, a caterer and mother of five from Bondi. "Growing up as a tomboy, I saw Kate as a figure of strength."

For more information about the Wuthering Heights events go to the Sydney or Melbourne sites.