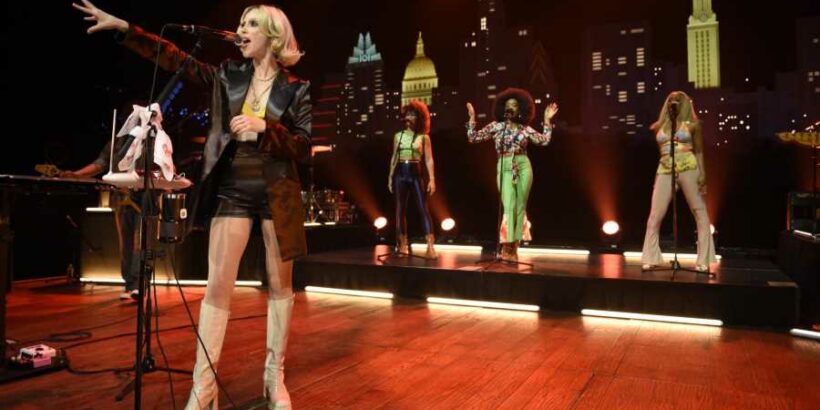 Because it is indeed the season, Austin City Limits has shared St. Vincent’s performance of “At the Holiday Party” from her upcoming episode in the second half of PBS’ long-running concert show’s 47th season.

The performance of “At the Holiday Party” begins with a light guitar strum and a waiter suddenly appearing on stage to hand out drinks to St. Vincent and her backing band. Before fully launching into the slick rendition of the Daddy’s Home track, St. Vincent proposes a toast to Austin City Limits and, “More than anything, to all of us getting to be back together again.”

St. Vincent’s made her first Austin City Limits appearance in 2009, then returned to the show in 2018. Her third appearance will air Jan. 15 in an episode that will also feature music from singer-songwriter Joy Oladokun.

'Silence of the Lambs': 'It Broke All the Rules'

The second half of Season 47 of ACL will officially launch Jan. 8 at 9 p.m. ET/8 p.m. CT with a broadcast of Austin City Limits 7th Annual Hall of Fame Honors. This year’s inductees include Lucinda Williams, Wilco, and Alejandro Escovedo, while the show (which was recorded back on Oct. 28) will feature appearances, performances, and tributes from Jason Isbell, Rosanne Cash, Margo Price, Shelia E., John Doe, Lenny Kaye, Japanese Breakfast’s Michelle Zauner, Terry Allen, and Bill Callahan.

Following the St. Vincent/Joy Oladokun episode, Season 47 will continue on Jan. 23 with Duran Duran, followed by Terry Allen on Jan. 29. Feb. 5 will see a re-broadcast of Olivia Rodrigo and Phoebe Bridgers’ recent episode, while the season will wrap Feb. 12 with a tribute to the late singer-songwriter Nanci Griffith, featuring footage from her seven appearances on ACL dating back to her 1985 debut.