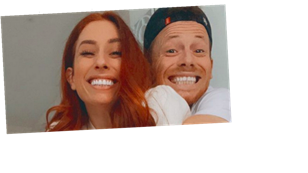 The 31-year-old had been so bogged down doing "pointless" life hacks on social media the day prior that she'd completely forgotten the former Dancing on Ice champs special day.

In the Instagram clip, Stacey can be seen perching on the sofa relaxing when hubby-to-be Joe enters asking "what are we doing for my birthday tomorrow?,'" before adding how "excited" he had been.

Stacey managed to keep her cool, not letting up to her TV beau that his birthday had in fact slipped her mind.

Instead the former X Factor star chirped back confidently: "It'll be good."

Before Joe responded: "I hope so mate."

Continuing to cover her tracks and the massive faux pas, she interjected: "It'll be exciting, it'll be a surprise."

She then turned to face the camera and said the F-word as Joe waltzed off from view.

Sharing the hilarious clip, she explained that she had muted her significant other so that he couldn't see her social media post.

With former skating winner now out of the picture, she was free to explain to her 4million followers that she'd made a huge mistake.

The mum-of-three penned: "OMG biggest bombshell ever. This lockdown has made me lose track of everything, completely forgot Joe's birthday tomorrow lol.

"I've instantly muted him from my stories and I'm on Amazon Prime as we speak."

Meanwhile, it seemed her nifty craft work actually came in handy as she had all the bits and pieces to create a memorable birthday card.

Using a black ink stamp, she grabbed hold of baby Rex's tiny foot – while sleeping – dabbed it in the dark liquid and returned his little sole to the white paper.

The ITV panellist hilariously told fans: "The only way to make these hand/footprints good it while they're asleep."

Yesterday, Stacey admitted on her livestream that she had spent the entire day procrastinating and doing "pointless" life hacks just to avoid doing "real life things".

Given Joe pulled out all the stops on Christmas Eve – presenting Stacey with a stunning diamond and asking for her hand in marriage, let's hope she can pull it out of the bag.