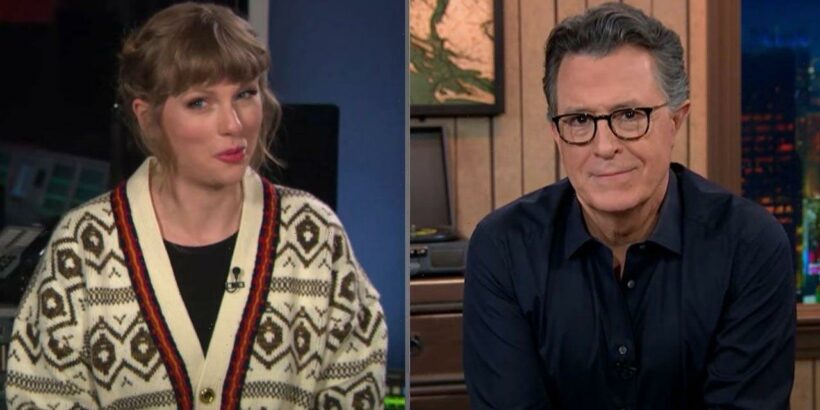 Stephen Colbert has long been a fan of Taylor Swift, and in the wake of her releasing her rerecorded version of her album Fearless, the Late Show host welcomed her on the show. Mainly, because he had one big pressing question.

“Hey Stephen! Thank you so much for having me on the show, finally!” Swift said with a smile, joining Colbert from her recording studio.

“Listen, I just want to get this out there,” Stephen said, addressing the elephant he felt was in the room: “Is the song ‘Hey Stephen’ about me?”

“Like I said, I’m a big fan,” Swift replied with an unsettling seriousness to her voice.

As her showcase of knowledge about Colbert’s life was revealed, it was clear the whole conversation was a gag — albeit a well-acted one, that showcased Swift’s comedic timing.

Swift explained that, in order to get into the same headspace she was in when she first recorded the song, she found her old mood board — which she revealed was covered in pictures of Colbert, circa 2008.

Despite this, she continued to maintain that the song wasn’t about him — and eventually revealed her true inspiration.

“I wasn’t prepared for this to be an extremely hard-hitting interview… but if you really want to know the truth, and I’ve never revealed this to anyone, ‘Hey Stephen’ is about Stephen King,” Swift finally explained.

“He’s amazing. The Dark Tower series changed my life, plus The Shining, The Stand, and don’t even get me started on his short stories,” she told an incredulous Colbert. “Absolutely luminescent.”

Regardless of who “Hey Stephen” is really about, there’s no denying that Swift’s new re-recordings have changed the game. Check out the video below for more on Fearless (Taylor’s Version).