Australian wildlife expert and TV presenter Steve Irwin, the man famously known as ‘The Crocodile Hunter’, has received a posthumous star on the Hollywood Walk of Fame.

The world-renowned conservationist died in 2006 after being attacked by a stingray while filming a documentary on the Great Barrier Reef.

On Thursday (April 26), Irwin’s widow Terri and their two children Bindi and Robert unveiled his star on Hollywood Boulevard in Los Angeles.

His family took to Twitter to announce the emotional ceremony, sharing pictures of themselves with Steve.

“Steve always said that he hoped his message of conservation would live on forever,” said Terri Irwin. “It means the world to us that Steve’s memory will live on in so many ways.”

Terri actually co-hosted with Steve on the internationally-acclaimed wildlife documentary series, The Crocodile Hunter, creating over 300 episodes together.

“I never in my wildest dreams imagined this would come true,” his daughter Bindi told the large crowd. “Together we will continue to fight for everything dad worked so hard for.” 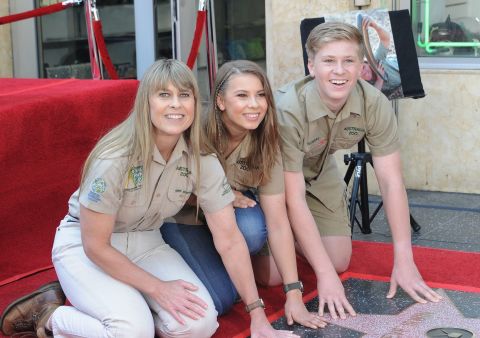 Irwin’s 14-year-old son Robert added: “This tribute just shows how great his work was and that his impression on people will last for generations to come.”

12 years is a long time to wait for a posthumous star, but it’s worth pointing out that one cannot be awarded until at least five year’ after the person’s death.